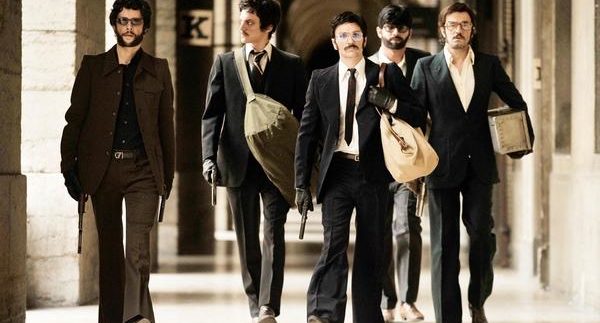 Cairo finally gets a French film in cinemas – one that’s not part of any film festival – but alas, it’s dubbed in English which completely defeats the purpose if you ask us.
Gang Story, or by its far less generic original name, Les Lyonnais, is about (surprise) a gang leader by the name of Momon – and what an upstanding, righteous citizen he is. You know, apart from the whole plundering, thieving and murdering aspect of his career that is. His reckless best friend, Serge, who he hasn’t seen for over a decade but feels a sense of loyalty to nonetheless, owes money to some people and is currently in the slammer surrounded by the guy he ripped off’s henchmen. Momon, perfect friend that he is, breaks him out, jeopardizing his relationship with his family in the process and incurring the wrath of both Serge’s enemies and the police force alike.

The film goes back and forth between the present day, in which Serge and Momon are both grandfathers, and their heyday in the seventies when they were active as a gang and near inseparable. In his younger iteration, Momon’s a short, scrawny dude with wavy hair. As a sixty year old however, he suddenly morphs into this powerfully built guy with a completely different hairline and hair that is, for some reason, now straight. You wouldn’t even peg them as family let alone the same person. Anyway, that’s the least of our issues as far as Momon is concerned. As a main character, he completely lacks nuance. We’re expected to root for him simply because the guy’s intensely loyal and keeps his promises. These are wonderful attributes but not when we’re being constantly urged to overlook his less savoury aspects and treat him like some sort of model citizen. This may be a by-product of the fact that the film is based on a true story and real life Momon is alive and kicking. Either way, he comes across as a perfect bore and his buddy Serge is an asshole, leaving us with a total of zero interesting characters.

The rest of the film is pretty entertaining, if virtually indistinguishable from your average American thriller. The one thing that makes it stand out slightly is that Momon grew up in a gypsy camp and was discriminated against by French law enforcement due to his background. This social slant gives the film a bit of depth and gives Momon a bit of context for his actions. Other than that, you get your usual car chases, shootouts and interrogations. The film as a whole is decently entertaining, yet with its lack of awards, buzz, or stars recognisable to an Egyptian audience, it remains a baffling choice to screen here commercially.

A Prophet, Tell No One, Le Cerle Rouge

If you’re hankering for films that haven’t been erased of their French-ness, the 5th Panorama of the European film kicks off on the 3rd of October. Mark your calenders.