A Monster in Paris 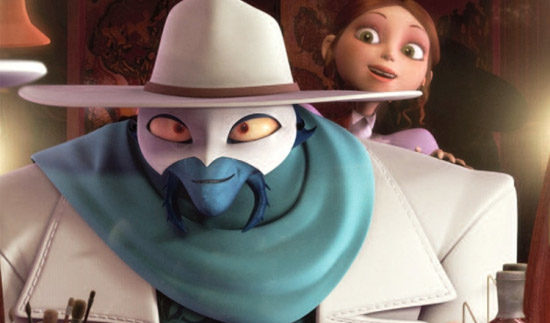 It’s the year 1910; the Seine is overflowing and Paris is drowning. Shy
filmmaker Emile (Harrington), and cocky inventor Raoul (Goldberg), get into trouble
while delivering a parcel to a genius scientist’s lab. Instead of the
scientist, they find his pet monkey waiting for them with orders to take the
parcel from Raoul without allowing him inside. Raoul barges in anyway,
tells Emile to film him, and he proceeds to tinker with the various concoctions
and potions while completely ignoring the various warnings inscribed on their
tags.

His meddling results in an explosion, a worse-for-wear lab and a
red-eyed flea, which is magically engorged to over six feet and promptly leaps
out of the lab to stalk the streets of Paris. The monster manages to throw the
city into a tizzy, making the front page and causing Maynott (Huston), a senior
government official, to start a vendetta calling for the monster’s death.

Enter Lucille (Paradis), the star singer at the local cabaret that Maynott
takes a fancy to. She encounters the monster outside of her stoop and after
being momentarily terrified, is swayed by the flea’s beautiful voice and gentle
lyrics. She invites him into her house, outfits him in a suit and hat to make
him less conspicuous, and gives him a job as a guitarist in the cabaret. However,
his disguise doesn’t hold for long, and soon Lucille is forced to enlist Emile
and Raoul’s help to keep the monster, now named Francoeur (Lennon), from being
killed by Maynott.

The film is charming and has a lot in common with classic Disney
musicals, but it never reaches the heights of films like Beauty and the Beast. Set in a vaguely
art nouveau-flavoured France, the film is visually very simple, but it owns its
simplicity so it never once feels like a shortcoming. The songs are gorgeous in
their sparseness. They don’t get the audio/visual bombastic treatment that
Disney gives its songs, but they’re nearly as magical anyway and every bit as
catchy. Paradis and Lennon’s voices go together perfectly and the scenes in
which Lucille and Francoeur perform together are probably the most charming.
The script is pretty funny and Raoul’s lines in particular illicit some of the
biggest laughs. A special mention has to go out to the monkey’s character that,
armed with note cards for every occasion, is probably even more amusing than
the humans.

A Monster in Paris is
sweetly old-fashioned to the point where it may not grab the interest of
younger viewers, who are probably used to the whole razzle-dazzle quality of animations
nowadays. It should warm the hearts of older ones, though; especially those immune
to Parisian charm. It’s quaint, a little rustic but magical in its own way.

The Triplets of Belleville, The Princess and the Frog, A Cat in Paris

Stay put for the credits, which feature a delightful sequence of the Seine sprouting giant sunflowers.