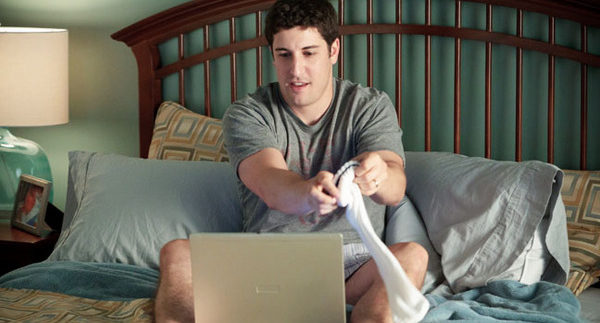 The American
Pie gang are getting back together for their high school reunion and are
bringing all their baggage with them. Jim (Biggs) and Michelle (Hannigan) are
stuck in a sexless marriage; Oz (Klein) is being turned into a superficial dolt
by his supermodel wife; Kevin (Nicholas) spends his time at home watching
trashy reality TV, while Stifler (Scott) still acts like an obnoxious high
school idiot. Finch (Thomas) is the only one who seems to be living the dream.
He apparently spends his time biking across South America. Back home, problems
arise in the form of ex girlfriends, Stifler’s mum, a band geek turned gorgeous
and an old babysitter who’s now hot and legal.

The
parts of the film that survived the censors’ onslaught aren’t particularly funny,
though there are a few laugh-out-loud moments sandwiched in between the
painfully awkward and the plain dull. The film is crammed with characters but
focuses mainly on Jim and Michelle- one of the flatter storylines in the film.
Far more interesting are the arcs of Finch and aforementioned band-geek Selena
(Ramirez). But compared to the rest of the guys, Finch’s story is more of an
afterthought. Another bum move is that the set-ups for some of the gags are
particularly forced. Kara (Cobrin), the old babysitter, throws herself at Jim
for no apparent reason and is determined to make him her first even though they
haven’t seen each other in years. In another scene, Jim and Michelle-
determined to spice up their nonexistent sex life- decide to have sex at
Stifler’s house during a party and change into S&M wear to do so. Who does
that? It’s not funny, it’s just baffling.

The Change Up, I Love You Man, Bridesmaids.

Eugene Levy, who plays Jim’s dad, is the only actor to have appeared in every single one of the eight American Pie films.