Black Gold: Oil, Desert, Arabs and Lots of Drama in Between 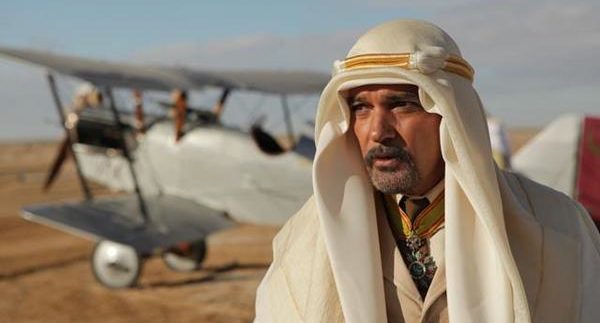 Black Gold
deals with the effect of the discovery of oil wells on the yellow strip; a
section of the Gulf common to two warring tribes headed by men with opposing
world views. One tribe is headed by Amar (Strong) while the other is ruled by
Nesib (Banderas). The latter is a modern thinker and will do whatever it
takes to implement progress, whereas the former focuses more on social issues and is wary of money and materialism. A peace treaty drawn
up by the two leaders, the yellow strip is to be a no-man’s land and to ensure
peace, Amar’s two sons are to live with Nesib and
his daughter Leyla (Pinto). One of these two sons, the quiet Auda (Rahim), grows up to marry
Leyla and become an emissary of peace between the two men as tensions rise due to the presence of Texan oil companies in the yellow
strip.

The cast is made up of a bunch of brown skinned actors of different ethnicities
who are passed off as Arab. This works for some more than others with the most
egregious being Pinto who, while stunningly gorgeous, looks every bit the
Indian woman that she is. Speaking of Pinto, there are exactly two female characters
of note in the film; her Princess Leyla and Kebede’s Aicha. While Pinto’s role
consists of gazing out of a mashrabeya and conveniently showing up for the sex
scenes, Kebede gets to play a very egalitarian woman who has endured being held
hostage as a slave without losing her spirit or dignity. They both get around
ten minutes of screen time combined. On the male front, Antonio Banderas seems
to think that the film is more campy than dramatic. On the other hand, Rahim is
great as the quiet, bookish Prince Auda who finds himself rising to the
occasion when leadership and war are thrust upon him. Also noteworthy is Ahmed,
who gets the film’s only intentional laughs as the sarcastic, exasperated Ali.

Dialogue-wise, the film has some real clunkers and a bad case of
repeatedly stating the obvious. The film frequently has small jumps in time
that serve to disorient the viewer and the two halves don’t really flow
together that well, with the first half focusing on how the oil discovery
changed the Gulf’s landscape while the second is more of a war film with
repeated skirmishes between the tribes.

While the film hammers home the point that Islam preaches peace and love
and that it’s all for progress, it also implies the idea that Muslims are fine
as long as they aren’t too ‘Arab’. This concept left an ultimately sour taste
in this reviewers mouth; the film seems to have been made for a Western audience. Another point that emphasizes this is that by the end of the film, Auda discards his robes for a suit and Leyla trades her burka for a blue dress
and uncovered hair, thus heavily equating modernisation with westernisation.

Black Gold is
obviously well-intentioned and one of those rare films that actually seem like
there was an attempt to do some research about Arabs and Muslims beforehand. It
earnestly tries to go past the dominant stereotypes and give Islam some good
PR. Unfortunately though; the film doesn’t always achieve these lofty goals and ends up being unintentionally cheesy.

Blood Diamond, There Will Be Blood, Lawrence of Arabia

Most of the film was shot in Tunisia during the revolution whereas the battle scenes were shot in Qatar.