Cop Out: Cops And Robbers Without the Chuckles 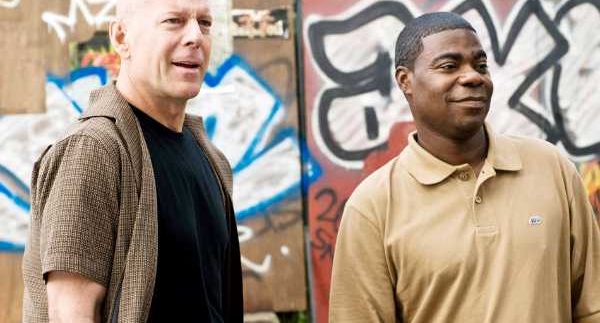 Cop
Out is a film smart enough to point out the
absurdities of the buddy cop genre, but lazy enough to use them nonetheless.
Satire is hard to pull off; and for it to work, the film itself must be
legitimate. Last year’s Zombieland is
a great example of a film that got it right. Rehashing genre clichés for 90
minutes and expecting people to pay for it is a creative, ahem, cop-out.

Originally titled A Couple of
Dicks, the film starts off with Jimmy Monroe (Willis) and his partner in
crime Paul Hodges (Morgan); two cops working for the NYPD who just sabotaged
months of undercover work for the whole department. Subsequently, they’re both
suspended without pay from the police force. Monroe’s daughter’s wedding is
next month, and his paycheck cut has left him with no other choice but to sell
his collectors’ baseball card to pay for the wedding. Things take a turn for
the worse when the card gets stolen and sold to the very drug lord that the
NYPD has been investigating. With the help of Hodges, Monroe must retrieve the card to salvage his
financial crisis and solve the investigation while he’s at it.

Willis and Morgan have the comedic chops, but the sum of their talent is
lesser than its parts. They have no rapport, and both seem to be sleepwalking
through the film. Willis may have defined the cop genre but he doesn’t seem at all
thrilled to be mocking the legacy that he has helped build. Morgan plays it safe and
relies on his 30 Rock shtick where he
cartoonishly shouts his line; which doesn’t really help when the one-liners
lack the zing and punch of his sharply witty TV sitcom. William Scott is in the
film for a mere blink, yet he is the only one who shines. His two scenes are
the only sources of good laughs in the whole film. If only we got to spend more
time with him.

You’ll enjoy Cop Out’s jokes,
the influx of pop-culture references, and the sense of validation you’ll get
when every scene unfolds exactly the way you thought it would; and for that
alone it’s worth your time. Sadly, the once-in-a-lifetime opportunity to watch
Willis parody his own cop film legacy could have been made into a better film.

For more cop parodies, watch The NBC show Community’s recent episode Modern Warfare that has ten-fold the laughs in 22 minutes.