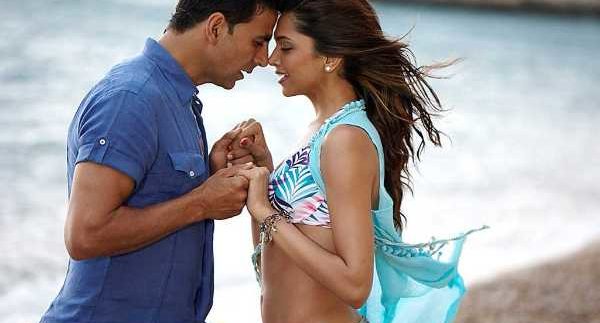 Bollywood has been going through a phase of international resurgence
lately. House Full (an unintended pun
on the name of the American sitcom Full House)
is a comedy that targets expat Indians living in Western countries longing for home-grown
laughter. This light comedy embodies the worst mechanics of Indian cinema: it’s
convoluted, exaggerated and fails to make any genuine human connection.

Akshay Kumar made a name for himself in his homeland by starring in
action flicks over the last two decades. As with many aging action heroes, he
has made a pre-emptive shift to broad comedy with some acclaimed results. However,
House Full is his silliest film to
date.

Things start out promising with an intriguing premise: Arush (Kumar) is cursed
with such bad luck, that the only job that he can manage to hold onto is as a
cooler at a casino. He’s such an unrelenting force of negative energy that just
by walking near a table, he causes all players to lose. Arush believes that his
streak of bad luck will be broken when he finds his one true love and ultimately
marries her. Not the most original idea out there.

What happens next is a series of zany mishaps and sidetracking,
supposedly designed to test your attention span. Arush does end up getting
married, within the first twenty minutes of the film– too early considering
the film’s epic 150-minute running time. But with that problem resolved, the
film presents another: his wife leaves him. And then another problem: he meets a
hot girl who dates him under the impression than his wife has died. But wait,
here come the predicament: the new girl has a strict brother who brutally
investigates suspected terrorists.

That’s just scratching the surface. There are enough instances of
mistaken identity and verbal misunderstanding here to make you question the
validity of spoken communication.

Interestingly, House
Full shows the similarities between the Indian and the Middle Eastern
cultures. Social values are practically the same, especially when it comes to
marriage. Also, the film’s humour resembles something we’d see in an Egyptian
film. It’s even executed with the same let’s-set-aside-the-plot-for-a-minute
manner. However, the Bollywood affinity for song-and-dance numbers maintains a
cultural divide, and there are enough of these flirtatious cues to make you
lose sight of an already complicated plot.

It’s baffling that this film got released in Egypt, as that would denote some
kind of universal appeal, one that made My
Name is Khan a moderate success– but there is none of that here. House Full plays strictly on the ethnic
appeal; and half of the jokes get lost in translation anyway.

The monkey that Arush fights with is in the film’s funniest scene is the same monkey from Pirates of the Caribbean: the Curse of the Black Pearl, making him the film's most internationally recognised star.