How I Spent My Summer Vacation

How I Spent My Summer Vacation: Entertaining Action-Thriller 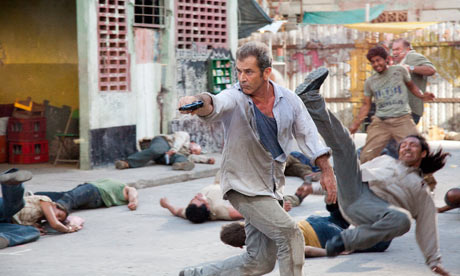 Sometimes
small is better. There are times when all you want is a basic, straightforward
action film that doesn’t require you to turn a blind eye to the rules of logic;
one that doesn’t consider good action and decent characters to be mutually
exclusive. How I Spent My Summer Vacation
is that film. It’s not a blockbuster but it’s very entertaining and does what
it sets out to do really well.

Mel Gibson
plays an unnamed criminal who steals a few million from an American businessman
and runs off to Mexico only to get caught by a couple of corrupt border police.
The policemen take the money and throw Gibson in a jail that’s more of a shantytown
surrounded by snipers than your classic cells-with-bars set-up. In
there, he meets a young boy (Hernandez) who shows him the ropes and teaches him
about the power hierarchy. Gibson adapts pretty well and starts to carve out a
little niche for himself, until the robbed businessman sends some of his
henchmen to find him and retrieve the stolen money. Gibson has to find a way to
break out of jail, taking the kid, who’s about to have his liver stolen by the
prison’s head inmate, and the kid’s mother (Heredia) with him.

The
main factor that pushes this film from average into surprisingly good is the decision
to have the Mexicans speak in Spanish instead of accented English. A sizeable
chunk of the film is subtitled which automatically gives the film a sense of
reality and makes it so much easier to take the characters seriously. Add to it
the City of God style visuals and the
Latin soundtrack and you have a film that feels authentically Mexican. And even though the Mexican
characters are mostly corrupt officers, criminals or dirt poor – sometimes all
three – they’re not walking stereotypes; both due to the sheer variety of the
characters and the acting. Even the criminals, who are basically everybody other
than the kid, are not portrayed as one hundred percent evil; they’re given
human sides and motives that shine a light on the logic behind their actions.

Gibson
gives a pretty understated performance, biding his time until his character’s
given a chance to let loose and show flashes of borderline insanity, but he’s
thoroughly watchable whether he’s eavesdropping, pick pocketing, brandishing a
gun or lobbing grenades. His charisma shines through and he turns his character
into a criminal worth rooting for. And speaking of grenades, the film is big on
violence though it hardly feels gratuitous. It has some pretty sweet, well
filmed, action sequences – ones in which you can actually see what’s going on –
and quite a few cool-guy-walking-away-from-explosion type shots, which while
ridiculous, are still completely entertaining.

Honestly,
this film was a surprise. Not only is it far better than its marketing campaign
lets on, but it’s genuinely entertaining. It’s a solid action film on all
counts.

In addition to starring in the film, Gibson was also a co-writer and producer.