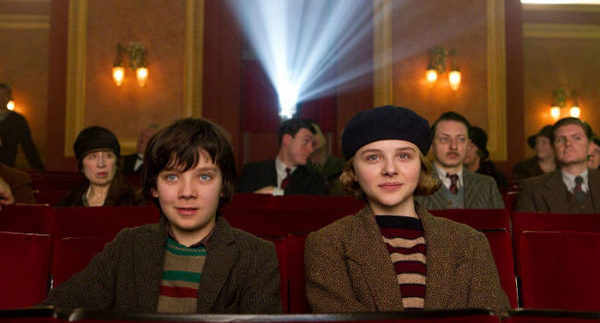 Hugo (Butterfield) is an orphan boy living in a train station in 1930s
Paris, winding the clocks and making sure they run smoothly as his father and
uncle had taught him to do. In his spare time, he tries to fix an automaton
that his father had been working on before he died by following the
instructions written in his father’s notebook. Unfortunately for him, Georges
Melies (Kingsley), a shop owner at the station, catches him thieving and takes
his notebook away from him. As Hugo and Isabelle (Moretz), Melies‘goddaughter,
team up to get the notebook back, they discover a connection between Melies and
Hugo’s automaton which leads them to discover the old man in a whole new light.

Butterfield is really great as Hugo and plays him with a quiet
determination and ferocity. Moretz’s Isabelle on the other hand, is a really
fun character. While Hugo’s orphan status has him grappling with life and
struggling to keep his world from crashing around him, Isabelle is sheltered
and lives vicariously through the books she reads. After meeting Hugo though,
her life takes a turn for the exciting and she starts to hunt for adventures
like her favourite literary characters, frequently peppering her sentences with
big words in the process. Kingsley’s Melies starts off as a bitter and sad old
man yet when the kids uncover his past; he takes on a completely different
dimension.

The film’s use of 3D is on another level. It doesn’t call attention to
itself and transcends the gimmick. It’s one of the few live action movies to
really integrate the tool into the storytelling. In addition, the sets are
absolutely spectacular, be it the train station or the clock tower.

Hugo isn’t all heart-warming
perfection though. The script lags and has a few standout clunkers. One
particularly unforgivable snatch of dialogue has Hugo telling Isabelle that
everybody has their purpose in life, like cogs in a machine. Even worse, it was
highlighted and turned into some sort of profound moment in the movie. It was a
rare schmaltzy misstep and really stood out.

The pacing is another problem. We spend film of the movie focusing on
either Melies’ refusal to give Hugo his notebook or Hugo trying to stay out of
the station inspector’s way. The formeris a minor detail in the grand scheme of
things while the inspector’s presence is more for comic relief than anything
else and there’s absolutely no reason why either of these should take up as
much time as they do. The movie only truly blossoms towards the end, when we
get to Melies’ story, and from then on it’s a fantastic ode to imagination,
creativity and filmmaking. It manages to make silent movies seem like the
daring, creative, groundbreaking works they were back then. It’s absolutely
fascinating and not just for cinephiles.

In this reviewer’s opinion, Hugo
isn’t the masterpiece it’s being made out to be. Overall, the good definitely
outweighs the bad and the film history portions of it are an absolute pleasure
to watch, but there’s no denying that it’s patchy and suffers, first and
foremost, from a weak script that no amount of extraordinary visuals can make
up for.

Midnight In Paris, The Artist, Oliver

Hugo has been nominated for a whopping eleven Oscars this year; more than any other film.