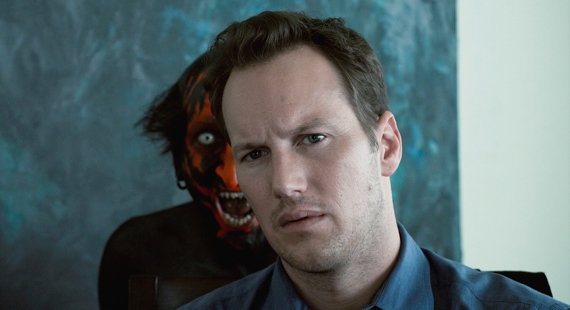 Josh (Wilson) and Renai (Byrne) move into a new house with their three
kids one of whom, Dalton (Simpkins), soon slips into a coma. When Renai starts
hearing voices and seeing shadowy figures around the house, she suspects that
the house is haunted. However, they soon come to realise that the problem is
bigger than just the house. Dalton’s soul has left his body and has travelled into a realm called ‘The
Further’. The spirits that Renai has been seeing clamour to take over his body,
leaving Josh and Renai trying to figure how to get their son’s soul back before he loses it forever.

This may have been a halfway decent horror flick had it not been for the
incredibly overwrought score. It completely lacks subtlety and resorts to
whacking you over the head with the emotions you’re supposed to be feeling. Though in its defence, the overcompensation
may be necessary considering that the film isn’t at all scary. The film’s main source of horror – the spirits – seemed like they
were borrowed from previous horror films. They’re intended to be scary but having seen similar ones so many times
before, they felt more like old friends than enemies

Another nail in the coffin is the set design. Films like this usually feature
the most spectacular houses; either absolutely gorgeous or nightmare inducing.
The only noticeable thing about the house in this film, setting aside the fact
that there’s no way a schoolteacher could afford it, is how
average it is. Even worse is that ‘The Further’, the supernatural realm that
Dalton’s soul is lost in, is in the exact same house only swathed
in darkness and fog.

Some parts that show the family dynamics are quite moving though, mainly
due to the pain, sorrow and fear that Byrne is capable of conveying through her
eyes alone. Wilson is also pretty good but in the family context he plays
second fiddle to Byrne; she stays at home with the children and is at the
forefront of all the craziness inhabiting the house. Wilson’s character becomes more prominent towards the end
when he takes an active role in bringing Dalton’s soul back but by this point, the film has just become so cliché that
you just don’t care. The family drama, the one thing that the film had going
for it, is shoved to the side right about the time a medium is brought in and
from then on, the spirits take centre stage, you start rolling your eyes and
only stop when the credits pop up.

Despite its epic blandness, the film’s ending is a setup for a sequel that will almost certainly happen since
it’s already made a ton of money overseas.

The writer and director, Leigh Whannell and James Wan respectively, are the same people behind Saw.