La Linea – The Line: A Messy Crime of a Film 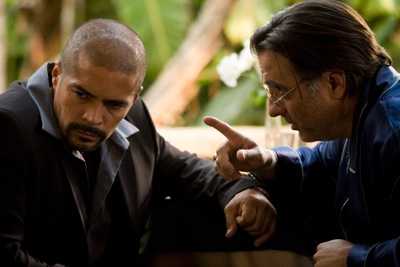 First screened in 2008, La Linea
is a crime story set in beautiful Tijuana, Mexico. The suspicious lack of online
information about the film gives the impression that as an independent film, La Linea suffers from a a case of inadequate
distribution. Yet after viewing the film, it becomes clear that there is a
bigger issue at hand: La Linea is a
poorly made film that has no business screening at multiplexes. The cast is
impressive, even for a studio release; yet, the film has all the melodramatic
charm of a dubbed Turkish soap series.

Mark Sheilds (Liotta) is a veteran assassin that gets called back for
some sort of mission. What mission? We don’t get to know exactly, but Sheilds
looks determined enough on his way to Mexico.

Javier Salazar (Garcia) is the leader of a lucrative drug business. Unfortunately,
he has to pass the torch to a new head of the family before his terminal
illness claims his life. He picks the ambitious Pelon (Morales), who’s not even
a member of the family– No, this is not Italy, nor is this the mafia. Between
Pelon kissing the hands of a catholic priest and Salazar’s disappointment in
Pelon’s ’lack of respect,’ it’s hard not to get confused.

Nothing really happens except lots of talking interrupted by the
occasional gun blast. Characters don’t have much to do; instead, they are given
pickles to put up with until the end of the film: Sheilds is hunted by one of his
victims’ ghost and Pelon just can’t stand his dying mentor’s illegitimate son.
Not exactly the most visually stimulating of conflicts.

Perhaps worse than La Linea’s disjointed storyline is the way that it’s filmed.
Employing dizzying use of steadicam, the technique doesn’t add any realism, but
rather comes off as a desperate cry for attention. Add some flashy quick-cuts
and jumpy close-ups and La Linea does
a pretty good job of summing up all the ways in which you should never shoot a
film.

Despite drawing heavily from Soderbergh’s 2000 film Traffic, La Linea feels
more like an uninspired Egyptian gangster film , and
that would be giving it too much credit.

Blow, Narc, Once Upon a Time in Mexico

Aside from acting in the film, Liotta also executive produced the picture.