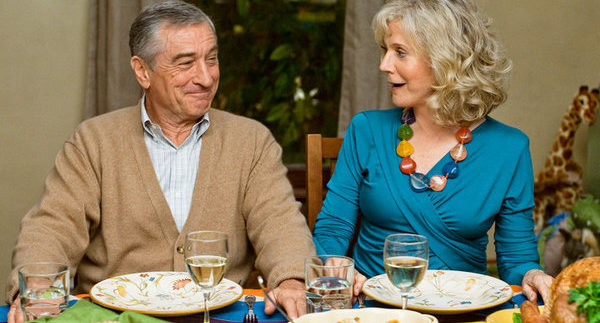 The unlikely duo of soft-spoken husband Greg Focker (Stiller) and commanding
father-in-law Jack Tiberius (De Niro) reunite in Little Fockers for another feast of debacles and bodily function
mishaps. By now, the comedic dichotomy that made the first film a hoot and the
sequel an inoffensive time-killer has been completely depleted. The new Fockers is not only contrived and messy;
it’s also alarmingly unfunny.

Patriarch Jack has an awakening as a result of recent heart problems. He
visits the Fockers as they are about to celebrate their twins’ fifth birthday, and Jack decides to stay in their house for weeks not only to attend the party; he also wants to pass
the torch to Greg and appoint him as– cue music– the new Godfather.

Immediately, Jack questions his own decision, and again he closely
monitors Greg for any discrepancies. Unfortunately, Greg is being seduced by a sexy
pharmaceutical company representative Andi Garcia (Alba), which leads
Jack to conclude that the two are having an affair. Jack even tells his daughter
Pam (Pollo) to dump Greg and go for Kevin Rawley (Wilson), her wealthy and still
eager ex-fiancé.

The only impressive thing about Little Fockers is the roaster of talent
involved. There is a moot Harvey Keitel bantering with De Niro about holes in
the ground, Dustin Hoffman and Barbra Streisand shamelessly bragging about
their sexual kinks, and a disengaged De Niro who miraculously delivers the
loudest outbursts without an iota of threat or sincerity.

Little Fockers has a fair
amount of comedy set-pieces; few of which work, but the rest are embarrassing
and painfully unfunny. There was a charming truth to the awkwardness of Meet the Parents; a relatable
predicament that all married couples go through to some extent. That reality is
no longer present in this third instalment; the film is filled with endless
jokes about Viagra, vomit and farts. At least, Little Fockers is courteous enough to run for a tidy hour and a
half.

Meet the Parents, Analyze That, Night at the Museum

Dustin Hoffman backed out of reprising his role and was written out of the film after expressing his dissatisfaction with the script. He then changed his mind and agreed to appear; so the filmmakers had to reshoot some of the scenes to re-incorporate his character.