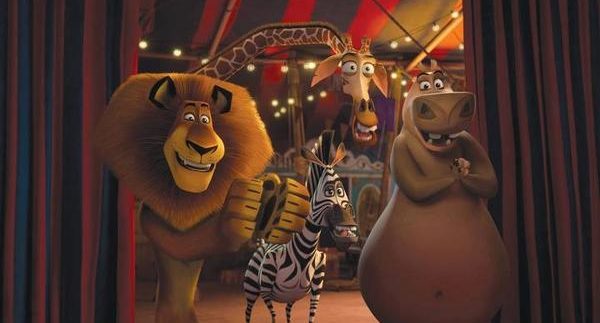 So far a trilogy, Madagascar: Europe’s Most
Wanted comes third in line to Madagascar and Madagascar 2: Escape 2 Africa. Generally
made up of the same characters, with the extras only changing, this third part
sees the group made up of Alex (Stiller), Marty (Rock), Melman (Schwimmer) and
Gloria (Pinkett) go on a new adventure to Europe.

The story begins in Africa where it left
off in the previous part. Alex, as always, longs to return to New York City
where he enjoyed a life of fame in the zoo. Deciding that this is what they
would do, the foursome makes their way over to Monaco to find the crafty
penguins that landed them there in the first place. Locating the penguins (and
monkeys that come with them) in a casino, the group recklessly barges into the
public area, scaring off the crowds and as a result end up with animal control Captain
Chantel DuBois (McDormand) on their trail. An animal head collector herself,
she is especially interested in acquiring a lion head for her wall. In trying to
escape, the group and the penguins, along with Julien (Cohen) and his posse,
find a circus train whose animals luckily let them in.

The story essentially revolves around them
being chased by DuBois and developing relationships with the animals from the
circus. The latter begins with Stefano (Short), an Italian sea lion,
unravelling the history of the circus and what led to its demise. Vitaly
(Cranston) is the mysterious tiger that had once been the star of the show, but
after an accident nothing was the same again. Coming together as a team, Alex
decides to take control of the situation and bring the circus back to stardom.

The characters’ animation is delightful
with exaggerated facial features, comic expressions and swift body movements.
DuBois is especially nimble despite her rounded shape and her wide set eyes and
full red lips appropriately match her dubious character. McDormand does a very
good job with the French accent and even has a small singing part.

Cohen as Julien is as entertaining as ever,
the lemur even embarks on a romantic journey with a depressed girl bear he
finds on the train. Alex also has his share of sparks with the tigress Gia with
whom he practices his trapeze skills. While the old characters delivered their roles
consistently to the previous films, it is nice to be introduced to the new ones
as well. Stefano especially is funny to watch as he talks through big teeth and
is oblivious to most of what’s happening around him.

The four penguins are as excellent as they
always were; nifty with all their makeshift gadgets which magically work
perfectly. They’re sarcastic and sort of evil but nonetheless pretty hilarious.

Towards the end of the film the story drags
on a bit. The action sequences lost our attention a little and when the grand
finale came about, instead of become engaged in all the new tricks the animals
learnt to perform in the circus, it was merely a mesh of colours and non
identifiable rings of colour in the air; scored to Katy Perry’s ‘Fireworks’ –
which really didn’t help.

Overall the film is entertaining and kids
would love it but essentially it’s just the same story told over, using
slightly different characters.