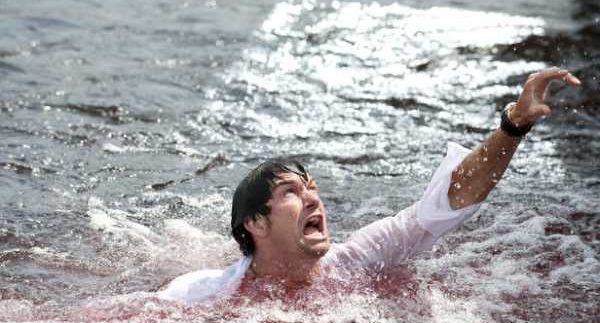 When a film opens with a Jaws homage as subtle as
a slap to the face, your expectations must adjust accordingly. Piranha 3D
is a joyful excess of bad taste. Not only is it shamelessly artless; the film is
also overstuffed with enough racy trash to make a smut producer weep. Every
minute of film pushes the bar lower until taste and standards become a vague,
abstract concept soaking at the bottom of a bucket of blood, all in the name of
good campy fun.

The
film’s ensemble cast is composed of characters so thin that their staggering
bluntness cranks up the rampageous delight. Jack (McQueen) is a local Lake
Victoria teen that finds himself amidst herds of frat boys and scantily clad
women visiting the lake during spring break. He meets Derrick Jone (O’Connell),
a Girls Gone Wild-type producer, who hires Jack as a guide around the
lake. What they and 20,000 spring breakers don’t know is that they are all now
part of a human buffet for the flesh-eating piranhas in the lake.

Between risqué scenes casually throwing skin in your
face or scenes of gratuitous gore, Piranha hardly has any time left for
story, reason or character development. Unfortunately, Piranha’s
good-natured attitude towards female nudity came with a heavy price for
Egyptian film goers, leaving the film hampered with buzz-killing cuts.

Aside from the pre-historical fish, Piranha stars
an amazing cast of familiar faces hamming it up. O’Connell chews more
scenery than the booze that he’s constantly drinking, Rhames’ shotgun-grabbing
abilities shine as he snaps yet another rifle and shoots at the water, and Scott
shows a remarkable talent in keeping a straight face in the most ridiculous
scenes.

Piranha 3D works predominantly as an insatiable guilty pleasure.
The use of 3D is also played for laughs and cheap thrills. So, if taste is a
prerequisite for you; then Piranha 3D is going to play like the biggest
insult to your senses, but those with a taste for trash will enjoy this
fun, twisted and bloody film.

In case you didn't like the film, Adam Scott promised on Twitter to personally come to your house and make you like it. The catch? You have to pen a 700-word essay detailing how the trashy genius of Piranha 3D didn't totally blow your brains.