Predators: The Universe’s Most Dangerous Game 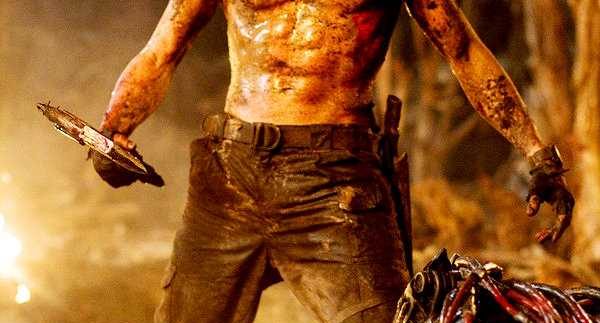 Predators is a cut or two
above most slot-filling action affairs. It starts out strong, stumbles a little
throughout the middle, but emerges victorious at the end. Given the numerous
ho-hum reincarnations that this film franchise has seen, this would be the most
solid film ever since the Schwarzenegger original. It comes closest to
recreating the looming danger of the first Predators,
while updating the setting with a few twists.

The film opens with Royce (Brody) waking up while falling from the sky; quite
the ecstatic jumpstart for an action flick. Royce falls into a mystical
tropical jungle unlike anything that he has ever seen before. He stumbles
across a group of nefarious soldiers and convicts, and so begins their doomed
journey. The middle part drags a little mostly because the multi-ethnic cast
members spend their time trying to discover what we already know: they are
stranded on an alien planet as prey for the vicious predators.

It takes the film some time to muster up the courage to show us the
predators, and after it does, it pushes them back to the ominous murk in favour
of suspense. This grows a little tedious as the film continues; it doesn’t
really work because of the hunted pack’s nonchalant demeanour. They all seem to
be unfazed by the fact that they are being hunted by crafty killing machines.

Who knew that scraggy Brody had it in him to beef up and take the lead in
Predators? The actor portrays the leader of the pack comfortably like a seasoned action star with sign of
struggle. In an unlikely action fashion, Predators devotes some time to developing its contrived supporting characters,
fleshing them out with enough humanistic ticks; so that when they inevitably
meet their gory demise, we’re left feeling a little sorry.

After dragging through the middle patch, Predators regains its momentum and brings us one thrilling action sequence
after another. The action is refreshingly restrained when it comes to scenes
with CGI; they’re mostly executed with old-school practical effects and
polished sparingly with computer effects. The overall aesthetic echoes the
original, but feels snappier and more exuberant.

The new incarnation of Predators is a welcome surprise, one
that might prompt another sequel.

Producer Robert Rodriguez penned a draft of the script in 1995, whereupon he was initially turned down by Fox. Good things come to those who wait, and fifteen years later Fox green-lit the film, giving Rodriguez complete control.