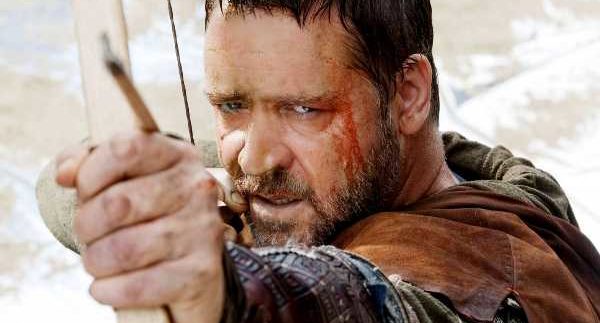 The Robin Hood we know is
an underdog hero who operates outside of the law to achieve justice. The Robin
Hood we get here feels more like a warrior fan of Braveheart‘s William Wallace and Gladiator‘s Maximus, who want all the glory minus the sacrifices. In
fact, at no point during the film is our hero referred to as Robin Hood; the
only reason the name is slapped on the poster is brand recognition.

Robin Hood is a fictional
character from English folklore; but you wouldn’t guess it by watching the film,
as it plants him in a heightened historical setting. King Richard the Lionheart
returns from the last Crusade with his tail between his legs, and then is
killed during a raid on a small French town. The throne is thus passed onto his
less competent brother King John. The French seize this opportunity to plan an
attack on the English; but before doing so, they plant a seed of a civil war to
ensure that the country will be in disarray when they invade.

Robin Hood (Crowe) accidentally
(and sometimes unwittingly) finds himself involved with both sides of
the conflict. But to solidify his motives, the film invents this factious
antagonist called Sir Godfrey (Strong), who with his shaved head
looks like he just walked out of The Mummy. Godfrey plays both sides and helps
turn the English barons against King John.

For inexplicable reasons, Robin Hood is stuck playing
pretend-husband to Lady Marian (Blanchett); and a courtship thus ensues. Both Academy-Award-winning actors bring their A-Game and manage to make it all seem
believable; yet their romance and witty banter seem out-of-place amongst all
the commotion.

Scott is a skilled director, and the battle scenes in
the film are impeccable, if not expertly plied to fit the PG-13 rating. However,
Scott seems to be living eternally in the 90s; his historical epic formula is
running out of steam in 2010: bearded men in gothic costumes who all look
alike; a noble and pure-blooded hero lost between the menials; huge battle
scenes and epic speeches; aristocratic women who are either widowed or trapped
in loveless marriages; and a powerful man who envies the hero.

Robin Hood
is a half-hearted film that doesn’t give us the same thrills as 300 or Troy,
nor is it a thoughtful historical epic with a gallant hero like Gladiator or Braveheart. The perfectly executed battle scenes and outstanding
performances will carry you effortlessly through its running time; but you’ll
forget about it the second the credits roll onscreen.

45-year-old Crowe crash-dieted and cut his long hair short for the role.