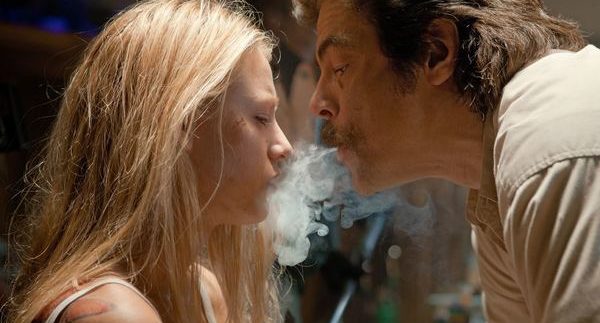 Ben (Johnson) and Chon (Kitsch) grow the best weed in the world. It’s so good that a big time Mexican drug cartel headed by a ruthless woman named Elena (Hayek) wants in on their gig. When the duo refuse Elena’s offer, she orders her men to kidnap their shared girlfriend O (Lively) and hold her captive until they cooperate with her, while Ben and Chon do whatever it takes to rescue O before Elena orders her dead.
Savages, as a whole, is a rather intense experience from the over saturated colours to Travolta, Del Toro and Hayek’s over the top performances. Together they make up the supporting cast and completely steal the film away from the leads. Travolta’s corrupt police officer is the slipperiest, slimiest kind of snake and Del Toro’s thug is – to put it nicely – seriously unhinged, while Hayek’s Elena is revenge obsessed and power hungry – a potent combination.

The leads however are a bunch of far less colourful characters. Lively, who narrates the film – a terrible decision if there ever was one due to her less than clear diction – is the trio’s weakest link; something emphasised by the number of close ups on her not very expressive face. Kitsch plays a run of the mill, volatile, tough guy and doesn’t make much of an impression on the film. Johnson, on the other hand, is fantastic. He’s the mastermind behind their little drug ring and is as much of a pacifist as Chon is aggressive. The most interesting part of the film is watching his peace-loving character grow and mutate in directions he never imagined possible.

Despite the fact that the film’s central relationship is basically a three-way, Savages has been scrubbed of all but the vaguest allusions to sex, courtesy of our censors. It has to be noted, however, that the violence, which is copious, is many different shades of disturbing and includes a guy getting whipped until his eyeball falls out, which is left unsnipped. Priorities; we have them.

The film’s vibe as a whole is interesting and entertaining. It strives for this over the top, pulpy, intensely cool vibe and as far as the awesome, Latin infused soundtrack and the kinetic visuals are concerned, it’s a definite hit. As a package though, the film isn’t as subversive or as shocking as it tries so hard to be and as a result, it’s a much more underwhelming experience than it should have been.

Jennifer Lawrence, who was all set to play O, dropped out of the film to star in The Hunger Games.