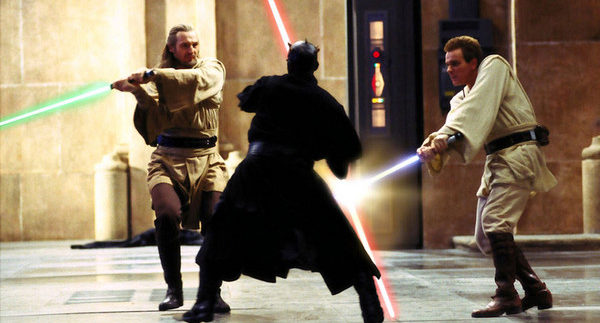 Jedi Knights Qui-Gon (Neeson) and Obi-Wan (McGregor) are sent to resolve
a conflict between Queen Amidala (Portman), ruler of Naboo, and the trade
federation who have blockaded her planet and plan to invade it. When their
meeting with the trade federation ends with their near death at the hands of
what seems to be one of the supposedly extinct Sith, they speed back to Naboo,
picking up Jar-Jar Binks, whose life they saved, on the way, only to find the
planet invaded and droid armies deployed everywhere.

The trio escape with the
queen only to have their spaceship break down. They’re forced to land on the
remote planet of Tatooine where they hope to procure the spare parts they need
for the ship. There they meet Anakin Skywalker (Lloyd), a slave boy who has a
way with electronics and is a talented pilot to boot. With his help, they
manage to mend the ship in addition to winning his freedom from his owner. Qui-Gon,
who senses a lot of potential in the boy, promises to train him as a Jedi and
takes him along as they try to free Naboo from the trade federation’s clutches.

The Phantom Menace has
not aged well which is ironic considering the fact that the original trilogy
which came out in the late-seventies and early-eighties has stood the test of
time. It isn’t fast paced or thrilling enough to hook kids nowadays, nor is it
particularly interesting for any older Star Wars newbies. It’s this reviewer’s
best guess that the only people going to see this reissue will be Star Wars fans
that want to revisit their childhood on the big screen again. And even those
people will leave disappointed.

The acting is just unbelievably stilted, especially Portman’s Queen
Amidala, who both looks and sounds like a robot. The dialogue isn’t helpful in
the slightest either. Portman’s lines revolve around how she won’t lead her
people to war while Lloyd’s are best summed up as ‘gee whiz!’ McGregor and
Neeson are saved the embarrassment primarily due to the fact that their
lightsabers grab any attention that may have focused on wooden acting or cheesy
dialogue. But even so, the Obi-Wan & Qui-Gon vs Darth Maul showdown is
strangely lacking in excitement even though double bladed lightsabers could
possibly be the coolest things ever.

The 3D here is further proof that conversion to 3D just doesn’t work.
All it does is add a vague sense of dimension to the picture; not enough to
justify the glasses or the extra money. The pod-racing scene which should have
been the 3D centrepiece is flat and doesn’t hold a candle to similar scenes
from more recent films.

As a standalone film, The Phantom
Menace probably won’t appeal to kids raised on rapid editing and epic
explosions, nor does it work as an introduction to the Star Wars universe.

The Star Wars films have made about $4.41 billion at the box office, second only to the Harry Potter and James Bond franchises.