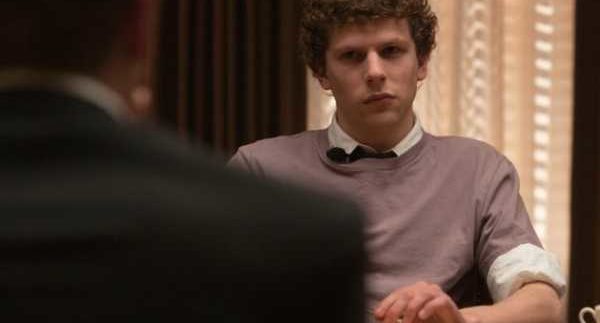 It’s not every day that we receive an invitation to an advance film
screening by a fashion brand. So, we were delighted to receive our invitations
to The Social Network, this season’s most anticipated and hyped film,
thanks to the lovely people at Bershka. Even better; we got to see it a day
early so that we could review it for you!

The rapidly changing nature of our social conduct may not be fully
understood until enough distance separates us from its genius. As history
begins occurring in real time, a hindsight analysis becomes more and more of a
luxury that we cannot afford. News stories must be written as events unfold,
the public’s shrinking attention span can only contain the now; and we’re in a never-ending
quest for the next new thing.

Cinematic studies of a specific era’s zeitgeist used to be retrospective, as
was the case with 1994’s Forrest Gump. However, David Fincher’s The
Social Network embodies the spirit of its time and serve as a timely study
of the Facebook generation’s defining ethos.

The Social Network is not merely a procedural drama chronicling the
origins of Facebook and its subsequent effect on society; that film exists only
in the margins. What’s at the centre of this story is a Shakespearian drama
with classical elements of friendship, betrayal, jealousy and power.

The story
is framed within two deposition hearings, the first where Mark Zuckerberg
(Eisenberg) sits opposite the Winklevoss brothers, who claim that Zuckerberg
stole the Facebook concept from them. In the second hearing, Zuckerberg faces
charges from Eduardo Saverin (Garfield), the co-founder of Facebook and Zuckerberg’s
former closest friend.

The film flawlessly cuts between the court hearings and the early days of
Facebook, giving what could have been a stagnant rehashing a propulsive
quality. The engaging momentum also stems from Aaron Sorkin’s (writer of The
West Wing) fierce script, which is crammed with sprawling, articulate dialogue.
The four-minute opening scene shows Zuckerberg with his girlfriend at the time,
bantering over a couple of beers. As they rat-a-tat their way through the
night, the tone shifts from enduring into outright hostility, exposing the
Zuckerberg essence and his discourse with social normality.

This brings us to the character of Zuckerberg, and Eisenberg’s rich
portrayal of the role. The Social Network paints a complex and alluring picture
of our generation’s youngest billionaire, but ultimately leaves the final
judgment up to viewers. Eisenberg’s Zuckerberg carries a lot of paradoxical
ideas within his character. At times, he comes off as the tragic anti-hero, and
at other times as an eccentric genius; but then he also seems to be a spiteful
jerk driven only by blind social competitiveness.

Eisenberg is not the only well-cast and ingenious performer in The Social
Network. In fact, all the actors in the film deliver career-defining
performances. Andrew Garfield as Zuckerberg’s best friend and confidant gives
weight to the role, transmitting the bitterness of Zuckerberg’s stings through
his deft facial expressions. Justin Timberlake makes Sean Parker
(Napster’s co-founder) a rock star of Silicon Valley, and in turn; he cements
his status as a serious actor with considerable range and a charismatic screen
presence.

The orchestrator of these performances, David Fincher attunes all of this to
his signature stylised image, rendering the film as a moody character study.

The Social Network highlights the significant changes to our social
landscape with the advent of social media networking, making for a film that is
insightful and also tons of fun.

Citizen Kane, There Will Be Blood, Pirates of Silicon Valley

The Winklevoss Twins are played by Armie Hammer with the aid of Fincher’s   masterful command of seamless CGI.