Hanging Out with the Black Lips in Cairo 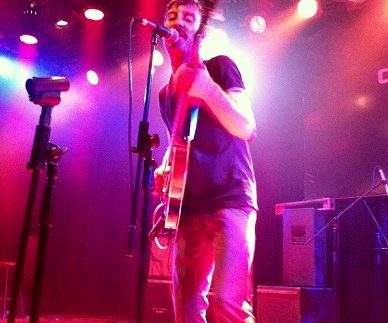 They’ve been threatening to do this for years and now they finally have; the Black Lips are in Cairo. You’d have been forgiven for taking their interest in the region as the mere ramblings of four mad men from Atlanta, but for a band who named their latest album Arabia Mountain, random is just another day in their lives.
After a quick stop in Cyprus, the group’s Middle Eastern adventure began right here in our beloved, clueless Cairo. Egypt has been ‘blessed’ by the likes of Kylie Minogue and Kelis in the past few years, but those concerts, and others like it, have been under the auspices of private events. Never has an act ventured to the Middle East knowing that they’ll make no money, neither through ticket sales nor through merchandising and album sales. It isn’t exactly a business-sensible plan, but Cole Alexander, Jared Swiley, Ian St. Pé and Joe Bradley are no ordinary band.

“We want to play everywhere. No band has really toured this particular region, for obvious reasons, but we want to play in as many locations as possible” says Jared, defiantly. It’s an inquisitiveness that is lent more from a probing love of music than it is from a touristic pursuit.

Cole, as the most musically curious of the group, weaved through the small, standing crowd at the band’s first night of performing at El Sawy Culturewheel, with eyes and ears fixed to the stage. It’s all part of a malleability that has kept the band grounded. Committing the most shameful act of fandom, we couldn’t help but let out a star-struck, school-girl giggle when Cole humbly introduced himself after gladly posing for a naff photo. We know who you are, Cole. You’re the reason we’re here, the reason we dusted off the camera and the reason we’re planning to go mental later.

Getting rowdy was partly an act of defiance against a conservatism that saw El Sawy demand that the band submit lyrics beforehand – to make sure things are above board. But maybe the boffins at El Sawy had it right. The bizarre audience included families with young kids who gleefully clapped along and one particularly stone-faced 60-year-old woman who seemed mightily unimpressed.

Performances by local bands 050 and Faking It pleased the mixed crowd; the former especially, with a mix of Oriental and western blends. It’s only when Canadian-Lebanese band, Lazzy Lung, took to the stage that this became a proper gig; no pretentions, no agendas, just music. Fronted by the burly, impressively-bearded Canadian, Allan Chaaraou, the quartet’s blend of indie rock and punk lived up to every inch of hype. This is, after all, a group that was once heralded as the best band in the region by Rolling Stone Middle East. Their set was so good, dare we say it, that it was going to take something special from the Black Lips to top it.

Probably the most danceable brand of rock around right now, Cole, Jared, Ian and Joe’s love of 60s music has moulded their sound into a effortlessly fluid mélange of garage rock and doo-wop. Maybe it was the jetlag, maybe it was a wariness of offending, or maybe it was the fact that they were spending most of the day being followed around by a documentary crew; but the performance was restrained, although glimpses of madness and spontaneity delivered emphatically to a zealous few.

Keen to unwind after what seemed to be a tense and muted performance at El Sawy, the guys took to the Flamenco Hotel’s Carmen Bar like a students melting away post-exam stress. Surrounded by a cluster of journalists and a troupe of fans still carrying the buzz of the gig, Cole and Jared sashayed around the small bar, happy to exchange words with whoever approached them.

But it’s the quirks of Cairo that seemed to entertain them most; Cole insists that the owner of the horrid tongue on Egyptian cigarette packets is his doppelganger and they were blown away by Cairo vendors’ commitment to home delivery. Take a bow, Drinkie’s.

It took seventy or so rowdy skater kids in Alexandria to ease the band’s inhibitions; a mood that we’re dearly hoping will blow into full force at the group’s final performance at Cairo Jazz Club. But it wasn’t all smiles on the way back from their second gig. In true Egyptian fashion, a visit to a foul and falafel stand ended with several upset tummies.
But they returned to Cairo with a skip in their step. Over dinner at Zamalek’s L’Aubergine, Cole’s eyes lit up at the mention of Egypt’s own Halim El Dabh; a musician and educator who’s considered one of the earliest pioneers of electronic music, having produced the first piece of electronic tape music back in 1944. It’s this vein of musical curiosity that had Cole even more excited at the Om Kolthoum and Abdel Halim Hafez tapes he’d bought at a gas station.

It isn’t exactly clear what, if any, upshot this tour will yield. Sadly, it won’t do anything for the cause of rock and indie music in Cairo. And it probably won’t gain the Black Lips many new fans in the region, nor will it encourage more acts to grace Cairo’s dilapidated stages. With no agenda or crusade on the part of the Black Lips, let’s just take this as one of those unexplainable life spectacles, and dearly appreciate it.

The Black Lips and Lazzy Lung will make their last performances tonight at Cairo Jazz Club, before going onto Dubai, Amman and finally Beirut.