The Cairo Tower: Still the Best View of Egypt’s Capital 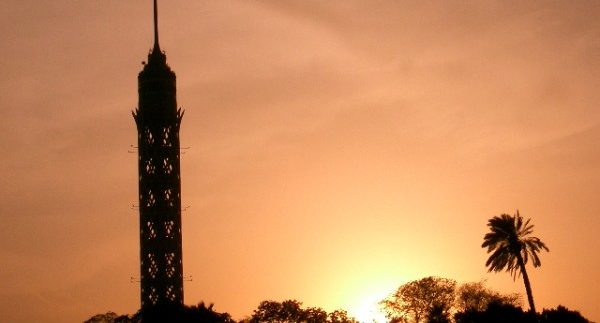 With quiet streets overflowing with refreshing greenery, fine restaurants, cafes and bars, Zamalek is one of Egypt’s most attractive districts and home to one of Cairo’s top monumental attractions — the Cairo Tower.

Just north of the Museum of Modern Art, the Cairo Tower has been the tallest structure in Egypt and North Africa for approximately fifty years, surpassed on the continent only by Hillbrow Tower in South Africa. With sixteen floors in total, the tower stands at an amazing 187 meters.

Some people today say that it has become one of Cairo’s most famous landmarks after the Pyramids of Giza and many famous figures – presidents, politicians and movie-stars including Katherine Hepburn – have marvelled at a truly unique view of Cairo.

Designed by Egyptian architect, Naoun Chebib, the tower was built using ganite, between the years 1954 to 1961.  Granite is also the same material used by ancient Egyptians which is symbolic in its own way as is its unique structure and fantastical form.

That lotus plant-like structure that we see when we look up into the sky is of no accident; it is in fact symbolic to the ancient Egyptians as this was the very plant used to make papyrus.

Something that not many people are aware of when it comes to the Cairo Tower is where the financial support originated from and in fact it was the Government of the United States of America.  $6,000,000 were issued as a personal gift to Egyptian President Gamal Abdel Nasser in an attempt to gain his favour, but he in turn transferred these funds to the Egyptian government for the purpose of building the Cairo Tower.

Once inside, after paying an entry fee of 20LE for Egyptians and 70LE for non-Egyptians, the view from the top is absolutely breathtaking in both daylight and night time when Cairo is lit up in all its glory.  In fact, if timed right, you can witness a romantic, radiant sunset that can be quite an enchanting experience and quite possibly the best time to be stood above the city.

At the very peak of the tower are two restaurants, one being the famous rotating restaurant where guests can sit by the window and enjoy a meal whilst gazing upon the city of Cairo, though the prices are a little steep considering the tower already requires an entry fee.  A Shrimp Cocktail starter costs a staggering 90LE.

It takes an average of seventy minutes for the restaurant to complete one full rotation and moves at an almost unnoticeable speed.  It is even possible to see the Pyramids from on a clear day.

Opening times are from 8AM until midnight during the winter months and from 9AM until 1AM in the summer time, making it accessible all day and late into the night.  The entrance to the tower can get quite busy considering there is only one small elevator which holds a total of eight people. Once inside though it takes no time to get to the top.