The Great Pyramids of Giza: Egypt’s Seventh Wonder of the Ancient World 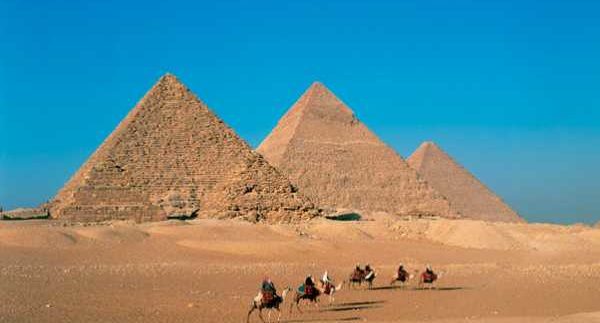 Egypt is a haven of history, from the Valley of the Kings in Luxor and St. Catherine’s cathedral in Sinai, to more recent tourist attractions such as Khan El
Khalili and the Azhar mosque in the heart of Cairo.

Whether gazing at the
riverbed where the River Jordan once flowed beneath the Hanging
Church in Cairo’s
Coptic quarters, or navigating through the overabundant plaques, jewellery
and mummies of the iconic Egyptian Museum, visitors come from far and wide for
the chance to experience Egyptian history in its present day.

Still, few monuments or
natural wonders compare to the Great Pyramid of Giza also known as the Pyramid
of Khufu (or Cheops in Greek), which is the oldest and last surviving wonder of
the Seven Wonders of the Ancient World. Crowded with bus-loads of tourists and
trinket-sellers they may be but the Giza Pyramids of Khufu, Khafra and Munkara
are most certainly worth a visit, whether you are Egyptian or traveling from
afar.

The best way to reach the
pyramids is by car; be warned that parking in the area can be atrocious and
when driving up to the gated area
itself, tour guides and sellers can be quite aggressive in approaching the car.
If you’re taking a taxi, men offering tours are likely to approach the driver
and ask to ride with you up to the pyramid gates. If you do opt for a taxi, it’s best to arrange for the driver to wait at a nearby car park across
from the main gates and a short walk down the road, as you will have to
fight for a taxi and haggle down extravagant prices with the taxis that usually
circle the area.

Note that tour buses and
guided tours are available at nearly any travel agency in Cairo if you want a package deal that
includes transportation and a guided tour.

Purchase a ticket at the
ticket windows located at both the walk-in gate and the gate near
the area’s parking lot. Tickets for foreigners cost 60LE. Egyptians must be prepared
to show proof of residency, or you will be charged the foreign price.

The Pyramids are surrounded
by paved roads, making it a pleasant walk on less crowded days. Along the way,
be prepared to encounter any number of camel riders, trinket sellers, and
people offering tours in languages ranging from Italian to Russian. For any
service that you decide to try; be it a camel ride or a jaunt around the
pyramids on a horse-drawn carriage, we recommend that you agree on a price beforehand and be prepared for
some of the toughest bargainers that you are likely to encounter in Cairo.

There are three
major pyramids in the pyramids necropolis in Giza. If you do not fear small
spaces, take the opportunity to step inside the small cavity of the Great
Pyramid (for a negotiable tip or fee) to experience the pyramid’s rather daunting
descending staircase as well as the king’s and queen’s respective burial chambers.

The Great Pyramid of Khufu is
believed to have been built over a twenty-year period and completed around
the year 2560 B.C. For centuries, the Pyramid held the record as the tallest
man-made structure in the world. Besides the many theories and symbolism that
it embodies, the Pyramid is one of the most breathtaking monuments of Ancient
Egypt; take a trip to gaze at its peak and see for yourself.

Although not as magnificently
large as the Great Pyramid of Khufu, the Pyramid of Khafra has a more complex
interior and a large number of statues dedicated to Khafra, son of Khufu,
including the Sphinx.

Situated right in front of
the pyramid and carved out of bedrock, the Great Sphinx depicts the pharaoh
Khufu as a man-headed lion, a major attraction for visitors. Having survived
the centuries since its old kingdom-era creation circa 2550 B.C., the features
of the majestic beast are slightly crumbled. While many claim that the Sphinx’s
famous loss of its nose can be blamed on Napoleon Bonaparte shooting it off,
historians differ on the validity of this theory; some claiming that the nose
fell several centuries before Bonaparte’s entry into Egypt. Nonetheless, it is
still a magnificent statue and being able to walk amongst its giant paws gives a
new perspective on history.

The smallest of the three,
the Pyramid of Menkara rarely gets the same attention as its two larger
neighbours; as it lacks the size of Khufu and the Sphinx of Khafra. Menkara’s
one advantage may be its material: the two predecessors used limestone, whereas
Menkara used the more valuable and pricier granite in his burial chambers.

Aside from the daily tours
around the necropolis, there is a nightly Sound and Light show held every day
after dusk. Visible from nearby Barry’s Oriental Restaurant, the show
features coloured spotlights projected into the sky, with a playful plot
pertaining to the construction of the pyramids. Perhaps not the most
fact-ridden or academic take on their origins, the show does provides
some playful entertainment for spectators.

Mysteries, theories and
debate have long surrounded the ancient structures, making a trip to the
majestic peaks all the more worthwhile.

For an exciting view of the pyramids, try
horseback riding around the pyramids area at night under the moonlight. The Mena House Oberoi’s café/restaurant Khan El
Khalili has the closest view of the Giza Pyramids and the Sound and Light show.