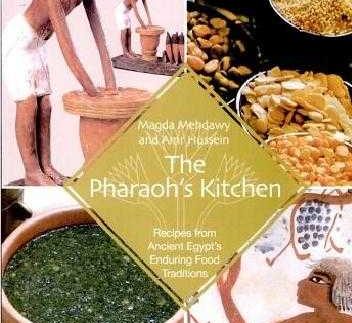 Written by
Magda Mehdawy and Amr Hussein, The
Pharaoh’s Kitchen (AUC Press) is an archaeologist’s documentation of the
ancient Egyptians’ culinary arts.

Published
in English in May 2010, the book arrives with an impressive pedigree: it is the
winner of the 2008 Gourmand Cookbook Awards for best African Culinary History Book, and
is written by the author of the modern classic My Grandmother’s Egyptian Kitchen, which has received its own
accolades and awards.

Interspersed
between vivid pictures of ingredients, cooked food or Pharaonic images; the
recipes are gleaned from historical documents or from present-day Nubian
cookery, which retains much of the old authenticity of the original recipes. However,
the bulk of The Pharaoh’s Kitchen discusses
the traditions and agriculture of ancient
Egyptian times. This gives a very clear insight as to why the ancient Egyptians
ate the way they did. These are the passages that are most entertaining,
especially when substantiated with translated texts and letters from ancient
nobles and pharaohs regarding the preparation and consumption of food.

Written
like an academic paper, the value of this book lies not in its wealth of
recipes, but in the information contained within. This writing style does not lend itself well
to the recipes, though. Cooking times are mentioned only in a fraction of the
recipes, and the specific cuts of beef or lamb are also often absent. This poses a
conundrum for those unfamiliar with cooking. To try out a recipe from this book
without a healthy frame of reference could potentially spell disaster for the
beginner cook.

Instead,
these recipes should be used as a starting guide, and then substantiated with
other similar recipes that contain more information about proper cooking times
and ingredient proportions. The authors have done a fantastic job of writing a
historical textbook about food rather than a cookbook about historical food.

After
reading this book, we can start looking at modern Egyptian food with a fresh
point of view, understanding that where we are is because of where we have been.
To learn that Ro’a’ has been around for millennia is comforting; if only for
the fact that a part of Ancient Egypt lives on today, and not just in the
genetic makeup of Upper Egyptians.

Food fit for Pharaohs: An Ancient Egyptian Cookbook, Nile Style: Egyptian Cuisine and Culture, On Food and Cooking: The Science and Lore of the Kitchen

Magda Mehdawy holds a degree in archaeology from the University of Alexandria. In 2004, she was awarded the Al-Ahram Appreciation Prize for the original Arabic edition of My Egyptian Grandmother's Kitchen. She lives in Alexandria. Amr Hussein is an artist and graphic designer. He graduated from Cairo University in 1979 with a degree in archaeology.