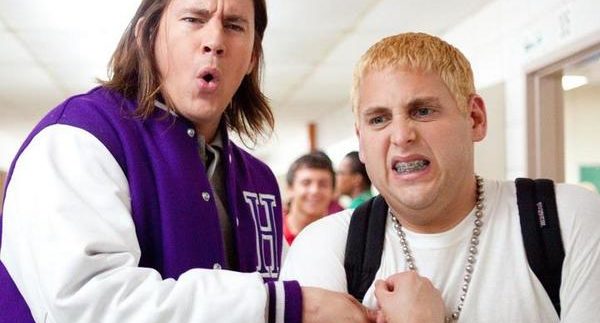 A
purely emotional review of this film would consist of a lot of uppercase
letters, a bunch of acronyms, hell yeahs, plenty of celebratory swear words and
a positive slew of exclamation marks. However, we do have to be a bit more
articulate than that, so here goes.

While
21 Jump Street may not be the ’best
film ever’, it’s definitely the most fun we’ve had in the cinema this year – by
a long shot. Jonah Hill and Channing Tatum play Schmidt and Jenko; a
quintessential high school nerd and dumb jock, respectively. The duo manages to
get over their mutual high school hatred of each other and bond in the Police
Academy where they soon become partners and best friends. Due to their youthful
appearances and highly immature ways, they’re stationed as undercover policemen
in a high school where a new drug is going round; one that’s already resulted
in the death of a student. Their assignment is to infiltrate the dealers and
find the supplier before the drug spreads to any of the other schools. On their
first day undercover though, they find that high school has completely changed.
Nerds are now in, dumb jocks are out and the partners find themselves
navigating through completely different high school experiences than their
first time around.

What
makes this film so much fun to watch is that Hill and Tatum are plainly having
a ton of fun onscreen. The story is basically about two dorks who, despite
their training in the Police Academy, still harbour a fantasy that
being a policeman involves a ton of car chases, explosions and gunfights.
They’re fundamentally immature and seem to think Die Hard is an accurate portrayal of an officer’s day to day life,
but their attitude is infectious and watching the film is a rather
exhilarating experience. The duo play off of each other perfectly; their
comedic timing is impeccable and their relationship is so cute that at times,
it’s touching. The film also has a solid supporting cast with Dave Franco as an
eco-friendly drug dealer, Ice Cube as a pissed-off commanding officer, and a
surprise cameo that is just too awesome to spoil!

The
film isn’t just a comedy though, it has some pretty sweet action sequences as
well. We get car chases, explosions, fist fights and shoot-outs galore. And despite the amount of action in the film, it’s doesn’t
feel superfluous in anyway; it really manages to balance the fast pace action
and humour – bringing out characters that you really end up caring for and sympathising
with.

In
conclusion, just go see it. It’s a ton of fun and it’s worth both your time and
your money.

Scott Pilgrim Vs The World, Superbad.

Rye Rye is in this film! She’s like Nicki Minaj and MIA’s hyperactive offspring, yet still more incredible than both of them combined. Sadly though, she doesn’t dance her way through her approximately 2 minutes of screen time.