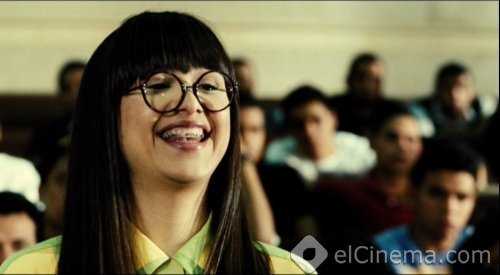 What happens after years of gruelling schoolwork followed by four, if
not five, years of college papers? Is it enough to secure a cushy future, or
are the new realities of our age going to render all these efforts in vain? Al Salasa Yashtghalonh (Arabic for The Three
Fooled Her) throws the question out there while turning around to thank its
lucky stars that it finally found something worthwhile to talk about. By now we
should congratulate ourselves; all the social dilemmas that we face have
created the perfect fodder for one of the most creatively bankrupt eras of
Egyptian cinema.

Nagiba (Abdel Aziz) is a straight-A student. Don’t let her Ugly Betty demeanour fool you; she has
never watched TV in her life. The girl is all about studying those textbooks.
However, in the course of two hours, she completely inhabits three conflicting
sets of philosophical paths with admirable ease and without a hint of scepticism.
Ostensibly, it’s a commentary on the Egyptian schooling system that favours
blind submission and parakeet memorising over comprehensive understanding.

Our perky heroine meets three different boys and
proceeds to eagerly mould herself to their liking. First, the spoiled mama’s
boy only pursues her to help him pass his exams. After the inevitable
rejection, she hooks up with a Downtown-bar socialist and joins him in public
demonstrations. When that too doesn’t work out, along comes the trendy
neo-Muslim preacher to pick up the pieces. However, his pious exterior is only
a front for his product-pushing agenda. And like the previous two love
interests, their courtship ends at the police station, where the
officer-in-charge (Lotfy) hits the reset button on her brain so she can go out
and make other misguided choices.

It’s a light comedy that frolics carefree,
from start to finish. The heavy subject matter is treated daintily, aided by colourful
art-direction, and the performances float perfectly in the film’s cheerful demeanour.
Abdel
Aziz breaks into her scenes with a big smile on her face and, apparently,
nothing on her mind. She shouts, jumps and gives cute second-take looks when
something funny happens. Put her in one of those motion-capture suits and
you’ve got an energetic cartoon side-character for the next Ice Age sequel.

Geared towards a family crowd, the film also
features a bunch of kids who inexplicably show up every once in a while without
causing too much distraction. And that’s how Al
Salasa seems to carry itself on; lightly and without too much cringing to its
credit.

The film flies by so fast; it doesn’t get a chance to do too much
damage, and in doing so, it succeeds in providing another cinematic summer
breeze. It’s one that won’t exactly refresh you, but it won’t hurt either.

After seeing the initial design of the film poster that featured her predominantly, Abdel Aziz had to step in and ask for her other co-stars to be included in the billboard ads.