Brooklyn’s Finest: Whom to Serve, Whom to Protect 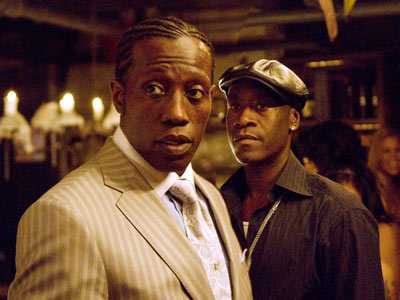 There is a critical moment in Brooklyn’s Finest where Sal, a chewed-up NYPD detective (Hawke) is
combing a crack house for money. He is possessed by his blind need. And while
he’s raiding the place, the space is filled with the unrelenting sounds of a
hip-hop jam blasting through the stereo chanting ‘Money, Money, Money, Money,
Money’. That’s the kind of blatant on-the-nose film that Brooklyn’s Finest is.

We got three hard-boiled men of law: Detective
Salvatore Procida (Hawke), Officer Eddie Dugan (Gere) and Detective Tango (Cheadle).
All three men are stuck at a bottleneck; Sal is struggling to make ends meet, and
is under pressure to pay the deposit for a house for his family and sick wife
as soon as possible. Dugan is an
ambivalent alcoholic about to retire after 22 years of service stripped him of any
human empathy, but the force won’t let him go that easily.Tango is an undercover cop who, after years
of playing a thug, is having an identity crisis and is on the cusp of a
complete breakdown. The stakes are already high, but they are about to get even
higher.

The film opts for stock characters and left-over crime
conventions as the building blocks for its story. So what, it works. It’s no
way near the level of complexity of Training
Day, but it sure can match its intensity. And if any film can deliver a pot-boiler
ending like Brooklyn’s Finest , you will not leave it feeling cheated.

What gives the movie its stamina is the weight of the
performances. In the hand of a less capable actor, Hawke’s Sal might have been
louder than a police siren, but it’s his restrained performance that sells the
action. Cheadle also hits the same notes. On the other hand, Gere underplays
his role to a mute– it doesn’t quite work as well, but it isn’t distractingly
bad. Wesley Snipes makes his first onscreen appearance in five years, showing great
range and helping further elevate the film’s overall intensity.

Brooklyn’s Finest is not a film willing to trust its audience,
and when it hits a brick wall with its story (and boy it does) it just tiptoes around it so fast you won’t even realize. It is a testosterone melodrama disguised as
gritty realism, and may surprise you with its emotional chokehold. Just follow its lead and don’t look around, because
it might distract you from some vigorous thrills.

Not recommended for dates; the film doesn’t hold back on the blood and violence.