Colombiana: Zoe Saldana Kicks Ass in a Rather Bland Film 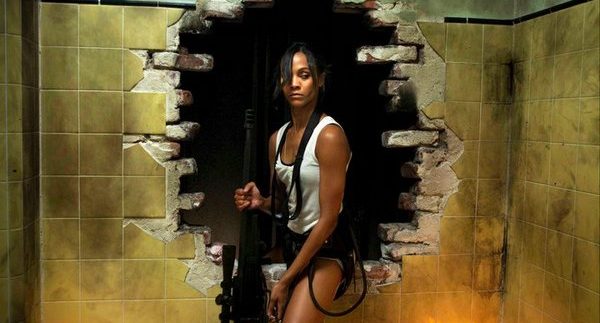 Ten-year-old Cataleya’s (Saldana) parents are murdered right in
front of her by some Colombian gang members who are after a sim card full of
important information. She manages to escape with the sim card and make her way
over to her hit man uncle in Chicago with a burning desire to learn how to
kill. She grows up into a lethal assassin working with her uncle for money and
privately hunting down her parents’ killers for revenge.

Columbiana’s
number one obstacle was presenting Zoe Saldana as a deadly killing machine
instead of a prima ballerina. For the most part, her stunts rely less on
hand-to-hand combat and more on guns and acrobatics, where she does a lot of
jumping in and out of air vents and scaling buildings. These gymnastic
situations are believable for an action hero with her figure.

However,
during the final showdown, Cataleya more than holds her own in a fist fight
with the guy that killed her parents and honestly, this scene wasn’t believable
in the slightest, even for an action film. It was also barely coherent due to
the rapid editing style that cuts before you can actually get a glimpse of
what’s happening. The other action scenes were much more interesting with the
standout being the gang of killers chasing after her to get the sim card in her
possession. This chase incorporated parkour elements and was shot in a way that
showcased the awesome jumps.

Saldana,
despite her figure, is quite convincing as a distraught, tough-as-nails woman
yet she does lack the sadistic streak that would make her character capable of
these killings. Nonetheless, it is immensely gratifying to see a woman
headlining an action film and kicking ass. In action films, women are usually
relegated to the girlfriend role, yet Columbiana
flips the script here and sticks Vartan in as Cataleya’s boyfriend, who pretty
much only shows up for the sex scenes then waltzes off screen. On the other
hand, while Colombiana pays lip
service to feminism by including some very blatant ‘girl-power’ lines, Saldana
is also stuck in her underwear for half of the film and is repeatedly filmed
taking off her top. Talk about mixed messages.

On
paper, this film is cool: despite some very obvious plot holes, the action
sequences are fun. Still, all in all the film just doesn’t click; it takes
itself too seriously. The only funny scene involved Saldana acting very, very
drunk to get herself in a jail where one of the guys on her kill list is
incarcerated. It was a bright spot of fun in a film that doesn’t even
acknowledge its more ridiculous script and settings.

Zoe Saldana’s charisma notwithstanding, Colombiana is the female equivalent of a Jason Statham film, i.e.
badass but bland.

Hired killings are not a strange subject matter for writer Luc Besson. The French director also has the Transporter trilogy, Leon and Le Femme Nikita to his writing and directing credits.