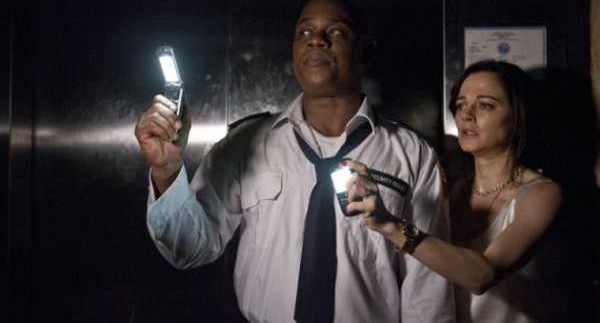 In one of cinema’s most ironic twists, Devil’s reason for existence turned out to be its own worst enemy.
The blessing of M.
Night Shyamalan, director of the brilliant The
Sixth Sense and a whole bunch of other loathed films, puts Devil in the unfortunate
position of having to overcome Shyamalan’s own baggage to earn viewers’ interest. This is a shame; as Devil is a truly gripping horror thriller free of Shyamalan’s
usual off-putting pretences.

The premise
is simple but quite effective: five sketchy individuals are trapped in an
elevator, unaware that one of them may be the devil. There is the sleazy
salesman who has screwed his fair share of innocent people out of their
savings; a posh, good-looking lady that’s also an unapologetic gold-digger; an unassuming
old woman who is also a compulsive pocket thief; a brawny looking fellow with a
criminal past, and last of all; a suspiciously coy man who has witnessed excessive
brutality during his days in the military.

From this classical horror setup, Devil
manages to deliver some interesting twists; keeping the mystery alive and
present for the film’s entire 80 minutes, which fly by fast. The elevator
scenes depict the claustrophobia of the situation well through cleaver camera angles,
never exhausting the location’s confined space. However, Devil is most ingenious in its use of darkness as a means of generating
fear, projecting pivotal scenes in the viewers’ imagination in their entirety–
harrowing and unnerving.

Getting trapped with the Prince of Darkness is a horrific prospect in itself, but director Dowdle
gives it a moody spin with his insular and bleak cinematography. There is a sense
of vacancy in Devil’s open landscape scenery that contrasts with
the confined setting of the elevator. Devil’s
cast of unfamiliar actors add to the film’s mystique while delivering
competent performances that ground the film’s sense of foreboding and hopelessness.

Devil’s
religious themes are heavy-handed and the film often hammers home its point too
blatantly. However, it’s not
uncharacteristic or out of place for a film that carries such a bold title.

Unlike other horror
affairs that opt for gore and blood to turn your stomach, Devil never feels
exploitive or nihilistically ambivalent; if anything, the film leaves you with
a renewed sense of hope.