Dinner for Schmucks: A Tasteless Feast 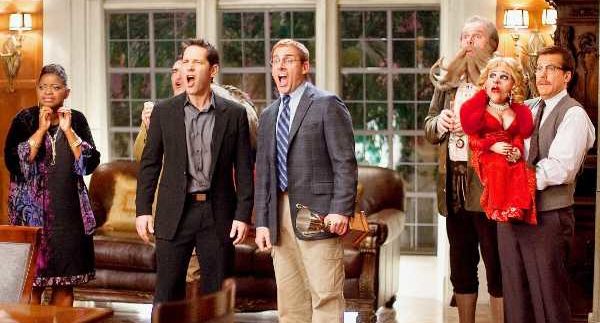 For a while, it seemed that no one was immune
to Paul Rudd’s everyman charm, that Steve Carell could turn every mumbling idiot into
an adorable goof, and that Jay Roach (Meet
the Parents, Austin Powers) was only capable of directing strong comedies
that lure thousands into the multiplexes.

Then along came Dinner for
Schmucks, a stuffy, joke-crammed comedy that catches all these talented
actors at their worst. That being said, even
at their worst, Rudd, Carell and the rest of the
dozen comedic talents are still funny; just not hilarious.

Tim Conrad (Rudd)
stumbles upon the career opportunity of a lifetime after he wows his boss, who
promises him a promotion. However, there is an odd caveat and it’s not business-related.
Tim’s boss invites him to a private party, where each manager brings in a
special guest for their amusement, and the one that brings the biggest imbecile
ends up winning his boss’s respect and a step up the managerial ladder.

As luck would have it, Tim meets Barry Speck
(Carell) after hitting him with his Porsche. Barry looks like Jim Carrey’s
older brother in Dumb and Dumber,
complete with the bowl haircut and a set of fake Chiclets teeth. Tim seizes this golden opportunity of buffoonery and invites Barry to the
dinner. Unfortunately, Barry is a moving disaster machine, and throughout the
day, he single handedly destroys Tim’s career and love life, sending Tim into frantic
damage-control mode.

The majority of the comedy in Dinner
for Schmucks feels uncomfortable; as most of it stems from unsympathetic
characters exploiting those less fortunate. Watching Rudd’s life collapse on
screen crosses the line from funny to unsettling at times. Even worse is Rudd’s
wayward characterisation; one minute he’s a ruthless go-getter and the next
he’s a caring human concerned with the wellbeing of others.

All of these flaws could have been forgiven if they inspired big laughs,
but sadly the countless jokes stuffed within Dinner for Schmucks fall flat. The edgy comics in the film are
given little to play with; Jermaine Clement of Flight of the Concords fame plays a less funny version of Russell
Brand’s character from Forgetting Sarah
Marshall. Even Galifianakis’ turn feels exhausted and rehashed and, like
the film itself, a wasted opportunity.

The film takes its premise for the 1998 French comedy The Dinner Game.