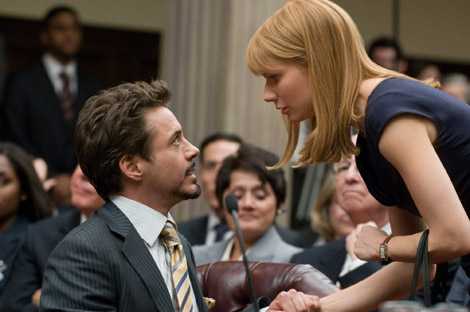 Summer has officially started at a multiplex near you,
and bringing in the heat is Iron Man 2,
the sequel to the 2008 hit starring Robert Downey Jr. The film didn’t reinvent
any wheels, but still struck a chord with audiences with its eclectic mix of
action, inconsequential fun, sexual tension and the Bond-like swagger
of Downey Jr. as millionaire playboy Tony Stark. Now, the new Iron Man has to at least live up to its predecessor, if not up the
ante a little bit.

In this installment, we’re past setups and clunky back-stories;
Iron Man starts with one thing on its
mind and one thing only: delivering the goods. And deliver them it does.

Starting
where the first part left off, Stark’s identity as Iron Man is uncovered to the
world. He is under pressure from the US government and the media to
divulge his technological secrets to the world, but he’s wary that the
information will fall into the wrong hands. Enter bad guys
Rourke and Rockwell as the Russian and the sleazy businessman.

Riding the wave of his Wrestler comeback, Rourke plays Whiplash, who stands up to our hero
in the metal suit. Armed with an uninspired back-story and worn out motives,
Rourke doesn’t rise above the source material, yet he delivers a menacing
performance that gives the film a real sense of urgency in the midst of all the
zingers. Cheadle replaces Terrance Howard as Stark’s best friend/sidekick,
while a leather-clad Johansson plays the femme fatale assistant/undercover
superhero in a role that will please every 13-year-old boy.

Paltrow returns as the long-suffering love interest
Pepper Potts, whose sole purpose seems to be to endure Stark’s antics and sigh
with frustration. Samuel L. Jackson stars briefly as SHIELD boss Nick Fury, in
a very obvious teaser for the 2012 scheduled Marvel blockbuster The Avengers.

Director Favreau keeps pushing himself outside of his
comfort zone with this entertaining sequel. The set pieces are now more
dynamic, the camera is less stifled, and the performances are all pitch perfect
and aligned. And while he’s at it, he single handedly provides the slapstick element
to the film by playing Happy; Stark’s assistant.

Several storylines are introduced to the two-hour film,
but director Favreau stops short of over stuffing the film and keeps things
moving at a lively pace. And it works because all the threads tie in together
at end.

Iron Man 2
is pure unadulterated fun with no dull moments. Prepare yourself for the usual
summer action blockbuster, and Stark won’t disappoint.

Watch out for a cameo by CNN news anchor Christian Amanpour as herself.