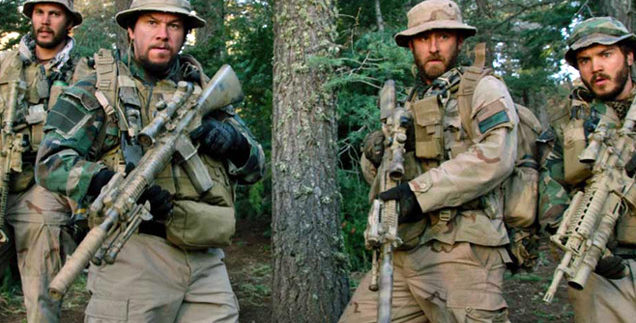 Based on nonfiction book, Lone Survivor: The Eyewitness Account of Operation Red Wing and the Lost Heroes of SEAL Team 10, Peter Berg’s Lone Survivor is an unyielding and uncompromising war drama, retelling a true story of heartbreak, courage and survival.

On June 28th 2005, Operation Red Wing launched with the aim of disarming and unsettling an anti-coalition militia located in the Pech District of Afghanistan’s Kunar Province. The main target was the group’s leader, Ahmed Shah (Azami); a ruthless Taliban commander who was responsible for the deaths of over twenty US marines.

Under the command of Officer Erik Kristensen (Bana), four Navy SEALS – Mike Murphy (Kitsch), Marcus Luttrell (Wahlberg), Danny Dietz (Hirsch) and Matt Axelson (Foster) – are sent to set up surveillance on the mountains overlooking the village where Shah is believed to be.

However, their operation is soon compromised and foursome is met with heavy fire from Taliban forces.

Carrying the emotional weight of the story to great effect, the four main performances are solid throughout.  Taking on the leading role, Wahlberg’s penchant for action and specific brand of wit are perfectly suited for the role of Luttrell. As Navy Lieutenant Murphy, Kitsch – known best for his role in TV’s Friday Night Lights – shows great presence on screen. Despite not having been given a lot of time on-screen, both Hirsch and Foster don’t disappoint either. Foster’s performance in particular is a highlight and is disarming and discomforting at the same time. Unfortunately, Bana, whose vast acting skills never really get to shine, is offered little room in what is a functional role at best.

The film‘s depiction of the brutality and callousness of war is constant – almost stubbornly so.  It’s the very human courage of men who choose to fight that is the heartbeat of the story. The action is ruthless and, again, constant; Lone Survivor features what is surely one of the longest shoot-outs in cinema history and it’s disturbingly authentic throughout.

Despite delivering a relentless and engaging insight into war, this is definitely not a normal film experience and won’t sit well with all cinemagoers; there’s no getting to know the characters or an easy introduction easing you into its ferocity.

Despite having a budget of $40 million, it still wasn’t enough; Mark Wahlberg and Taylor Kitsch lowered their fees considerably to see the production through.