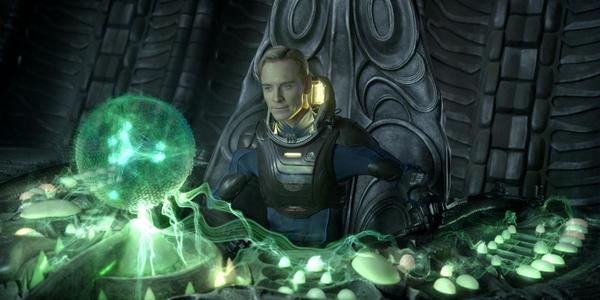 It’s
the year 2089 and Elizabeth Shaw (Rapace) and Charlie Holloway
(Marshall-Green), both archaeologists obsessed with ‘creation’, have discovered
a set of pictograms from different civilizations that all point to the same
planet. Convinced that the planet in the pictures is the one from which our
creators hailed, they decide to go and meet them. They set off on a spaceship
called Prometheus with a crew that includes Janek (Elba), the captain; Meredith
Vickers (Theron), the boss; and David (Fassbender), a top of the line android.
Their arrival on the planet triggers events that could affect the entire human
race.

The
two main problems with Prometheus
are to do with casting. Pearce, who is generally a great actor, plays an old,
dying man and is barely discernible under the barrel of makeup that he’s been
coated in. The kicker is he doesn’t even look that old, just severely made up.
The second problem is Rapace’s accent. She doesn’t sound
English at all so they shouldn’t have tried to pass her off as that. It’s
distracting and could easily have been avoided since Shaw’s nationality has
zero effect on the plot.

The
bigger issue with Rapace, however, is her acting; she doesn’t hold a candle to
either Theron or Fassbender who, in comparison, are mesmerising. She does do
really well with the action/horror sequences though. Despite being an android,
David is the most complex character on the ship. He’s a slave to his creators
despite being superior to them; he’s disdainful of their desire to meet their
engineers who he imagines will care as little for the humans as the humans do
for him – Fassbender is both fascinating and chilling in the role. The way he
moves alone conveys that even though he may look human, he isn’t.

Visually,
Prometheus is a beast. It will
probably give you a slack jaw for the entire two hours. It takes the
established sci-fi visual vocabulary to the next level. It’s filled with flashy
tech, rubber jumpsuits, platinum hair, freaky aliens and is drenched in blue
tones; all in all pretty regular stuff for a film set in space. But the film
doesn’t look pulpy, kitschy or over the top in the way that many sci-fi films
do. It encompasses classic beauty as well as a sense of tension, wonder and
danger. The opening scene, which was shot in Iceland, is spellbinding and
slightly reminiscent of The Tree Of Life.

Prometheus is supposedly a prequel to Alien though it doesn’t require any prior knowledge of the film nor
are they directly related. However, if you haven’t seen Alien, you will lose the jolt of recognition that comes with the numerous
references to it.

The
film is huge in scope but unfortunately the ending doesn’t have the same sense
of grandeur; parts of the plot are left hanging and the result is more
irritating than thought provoking. However, what the film does right, it does
spectacularly. This is one production that deserves to be seen on a cinema
screen. Also, Michael Fassbender is awesome.

Prometheus is named after a titan from Greek mythology who stole fire from the gods and gave it to humans, essentially giving birth to life as we know it.