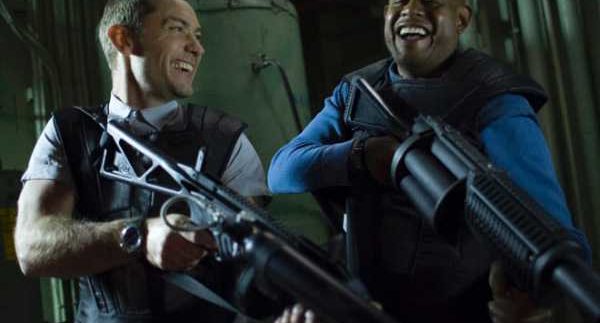 The dystopian future depicted in Repo Men is the only place where watching this film may be
considered entertainment. It’s a bleak 2025 where the human body is treated
like a car, and the best solution for any medical problem is to simply get an
artificial spare part. They’re not cheap, though; a single kidney can run you
around US$600,000.

Not to worry, the Union
(the synthetic organs supplier) has a payment plan that fits your lifestyle.
Just sign their contract and ignore the fine print. So what if they’re going to
send a man to hunt you down, cut you open, and reclaim back the organs– while
you’re still alive. If Jude Law was your angel of death, it couldn’t be all
that bad.

Opening with a
Sesame-Street explanation of Schrödinger’s cat paradox, the film denounces any
shred of sophistication. Remy (Law) and Jake (Whitaker) are two best friends since school who work together as
repo men. The future has so many laws protecting evil conglomerates, and it
seems laws against manslaughter fell out of fashion. So, to get their job done,
the two have no problem slaying people to get back the company’s property. However,
after suffering an injury that
damaged his heart, Remy ends up a slave to the unjust system that he once enforced
and he becomes the next target on Jake’s list.

The film delivers a few
scenes of good ol’ fashioned fun when it’s not busy with its blatant
exposition. The scenes are exceptionally gory for a mainstream film; one notable
shot near the end shows Law taking off his jacket and pulling out a couple of
bayonets before going ballistic on a group of guards in a hallway. That scene
alone saves Repo Men from becoming a
complete waste of time.

You can’t fault Law’s and Whitaker’s performances.
They do a fine job playing along with a tonally undecided film. At first it
feels satirical and inconsequential, but then it gets dead serious, and then it
falls back on cynicism. Its attitude is so cavalier about human life– bodies
hit the ground faster than raindrops– yet it goes to extreme measures to save
one.

Repo Men feels dated and
contrived the second it hits the screen. It was assembled out of failed artificial
organs of other genre films to fill
late-night blocks of 24-hour film channels; only no one is going to reclaim the
parts that made this generic dud.

A student of Filipino Kali, Forest Whitaker skills came in handy when he had to perform the several fight scenes in the film.