Snow White and the Huntsman

Snow White and the Huntsman: Dark Twist on Classic Tale 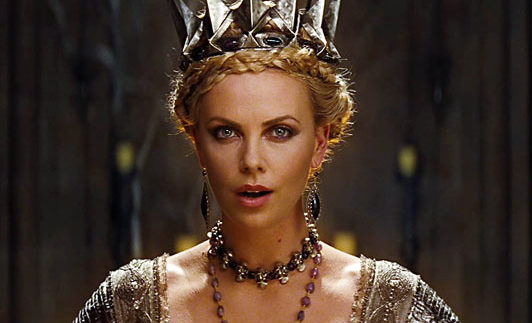 Ravenna (Theron) tricks Snow White’s (Stewart) father, the king, marries
him, kills him and takes over his kingdom. As the result of a spell cast upon
her at childhood, she sucks the youth out of beautiful women so she can stay
young and pretty forever. She then uses this beauty to grab as much power as
she can. Foreseeing a day in which Snow White’s beauty would make her immortal,
she locks the girl up in a tower. Years pass and the time has come for Snow
White to be of use to the queen, however she manages to escape into the dark
forest bordering the kingdom. The queen sends the Huntsman (Hemsworth) to bring
her back but he instead turns rogue and pledges to help Snow White cross the
forest and reach the rebel stronghold where they can assemble an army to take
on the queen and her minions.

The thing about this story is that so much of it has been changed that
it’s essentially become a Lord of The
Rings-esque film. But while the filmmakers were busy making everything
darker and more epic, they forgot to give Snow White a personality. Rooting for
a character just because she’s pretty and fairies like her is too much to ask of
an audience. Besides, throughout the entire film she’s more of a
run-as-fast-as-you-can type of girl – she’s no wilting flower but she’s not a
fighter either. Suddenly though during the last act, she’s decked out in full
armour, wielding a sword and heading into battle. She’s a blank slate and
Stewart doesn’t give her even a tiny sliver of spirit.

We’d heard people, before the film came out, complaining about how
Stewart was miscast because there’s no way she’d ever be considered prettier
than Theron. This is actually the least of the film’s problems, especially
considering that the film keeps emphasising that everyone loves Snow White for
her beauty and spirit without showing us any evidence of the latter.

Theron’s
performance is fine. She’s consistently dramatic, evil and over the top, but
it’s just not the scenery chewing performance that the trailers had led us to
expect. All in all, Theron’s Ravenna is far more interesting than Stewart’s
Snow White, but Hemsworth’s Huntsman tops them both. He gives the best
performance of the film, is the only one we emotionally connect with and, as a
result, is the most watchable character. The only downside is that in the film’s
love triangle, the Huntsman seems too good for Snow White who’s more in line
with William (Claflin), the ‘Prince Charming’ character who’s even more vacant
than Stewart is.

The visuals save this film from being completely ordinary and it’s here
where the attempt to turn the fairy tale into a fantasy epic really shines. The
trolls, dwarves, fairies and magical armies all look spectacular. Theron’s
aging effects are truly creepy and so is the dark forest which, with its bugs,
serpents and barren trees, is basically death on screen.

It’s an interesting take on the fairy tale and the detours that the film
takes from the traditional narrative work really well. But while the general
atmosphere is as far as you can possibly get from the Disney version, it’s a
shame that the main character isn’t. While she doesn’t pine continuously for a
prince, the general everybody-loves-her-because-she’s-pretty essence is still
intact and it’s just too Disney for a film that tries to be a gritty epic.

Johnny Depp, Viggo Mortenson, Hugh Jackman, Michael Fassbender and Tom Hardy were all considered for the role of the Huntsman.