Splice: The Human Hybrid of the Future 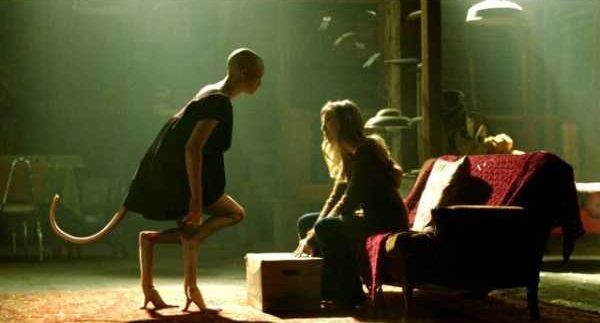 Set
in an icy cold modern day, Splice
ponders the repercussions of toying with the human life form. ‘If God did not
want us to explore his domain,’ asks Clive
Nicoli (Adrien Brody) in an interview with Wired magazine, ‘Why did he give us the map?’

Nicoli and his partner Elsa
(Sarah Polley) are genetic engineers working for the NERD Corporation, where
they mutate new hybrid creatures out of DNA cocktails. The goal is to breed
life forms that produce vaccines for numerous ailments and diseases; a morally
questionable act that’s nonetheless for the benefit of humanity.

The
first by-product of their experimentation is a gooey amorphous mess, which
lacks a crucial component: human DNA. Since using any human component is verboten
by the corporation, Clive and Elsa skip the paperwork and play God on their own.
The end result doesn’t turn out quite the way that they had expected, and between raising
the spliced creature and keeping it a secret from the world; the couple spend
most of the film grappling with bigger problems than what they had bargained for.

Splice combines b-horror film campiness with the
deliberate and slow-pacing pastiche of art-house films. The result is a unique
film that plays differently from the typical monster horror flick. Due to low
budget restrictions, events are mostly confined to a few locations with tension
spawning from anticipation as opposed to full-blown monstrous attacks and chase
scenes.

The
Splice creature in the film boasts some of the best use of computer imagery, as
evidenced by the flawless interactions that it has with the other actors. And
while Splice appears to be a monster
film, the fact is that the spliced creature has more human qualities than the
traditional boogie man.

Splice takes a truly shocking turn towards the end, which is more disturbing than
horrifying. However, the unsettling and pivotal climatic scenes all get
censored in Egyptian theatres, leaving the viewer perplexed and wondering why
they had to experience a film without closure.

It
is recommended that you watch this film uncensored on DVD instead, where you
can truly appreciate the moral questions that Splice raises.

The film screened at the 2010 Sundance Film Festival, where it won Best Special Effects. Warner Bros picked up the film’s distribution and gave Splice wide release.