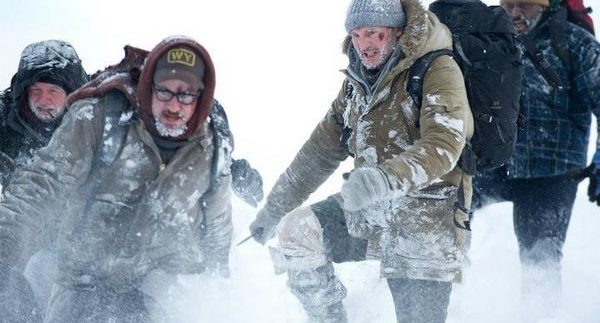 The Grey takes ‘survival of the
fittest’ to a whole other level. Seven men survive a plane crash in a desolate
part of Alaska and must now choose their preferred method of dying; the cold,
starvation, injuries, drowning, falling off of cliffs or the most threatening
of them all; wolves with glow-in-the-dark eyes. They get picked off, one by
one, as they stumble ever deeper into the wolves’ territory.

The Grey’s director comes from
the school of shake the camera whenever something remotely exciting is about to
happen. He’s not a student; he’s the freaking valedictorian. Whenever a wolf
goes in for the kill, the camera goes crazy and the image turns into a grey/blue/white
blur, giving it a very low-budget look. It’s infuriating; filmmakers should
know by now that fast cuts and shaky cams are only okay when you can actually
see what’s happening on screen.

Even more incomprehensible than the blurry death scenes is the
filmmakers’ insistence on making the pack of wolves the major threat when they
had the bleakest, most desolate setting at hand. It should be common knowledge
that if your budget doesn’t cover decent CGI, then you probably shouldn’t be
giving it such a big role. On the other hand, the landscape is terrifying. A
highly compelling film could have been made out of the survivors trying to
battle the blizzards, frigid temperatures and complete lack of food, all of
which really highlight the meaning of ‘force of nature’. Even watching people die of frostbite would
have been scarier than a succession of wolf attacks.

Having said that, the film does occasionally manage to be deeply
unsettling. Neeson plays a suicidal man who discovers his inner alpha when
placed in a life-threatening situation. He assumes the role of the leader,
taking it upon himself to get each and every one of the survivors back to their
families. His scene with Grillo, in which a knee injury causes Grillo’s
character to resign himself to death and wait for the wolves to catch up with
him, is highly resonant.

The main themes revolve around survival, the lengths that humans will go
to in order to survive and about how man is both powerless against nature yet a
threat to it too. It is repeatedly emphasized that the wolves are only
attacking them because they feel threatened. The humans stumble into their
territory and the wolves were spurred into attacking them for their own
protection. Parallels are made between the wolf alpha and the human alpha,
Ottway (Neeson), as they both organise their packs in ways that maximize their
chances of survival.

The Grey is a decent film that
is at its strongest when contemplating survival in an arctic atmosphere.
Unfortunately, though, the wolves are just plain dodgy; comic even.

Bradley Cooper was the first choice for the role that ended up going to Liam Neeson.