The Last Airbender: As Lifeless as the Four Elements 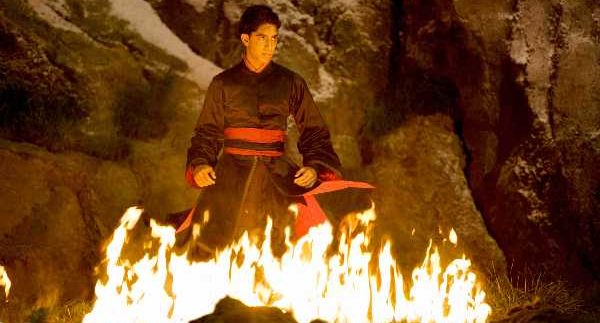 Based on the popular Nickelodeon animation, The Last Airbender manages to squeeze as
much action into a film as possible– unfortunately without capturing any of
the magic seen in the children’s show. How such exciting material got turned
into a pedantic bust is truly miraculous. Nevertheless, it’s not a complete
failure and maintains a few features that can be interesting in their own
right. Still, The Last Airbender struggles
to grab our attention despite all the fire eating away at the screen.

The film takes place in a mystical world
divided into territories that are defined by the natures of the people that
populate them. The world has a flat-surface Lord
of the Rings feel to it, where each nation correlates with one of the four
elements: there is the water nation, the earth nation and the furious fire
nation. As for the air nation, the distressed fire nation wiped it out about a
century ago.

Two kids in the ice world stumble upon a huge
iceberg, which melts to reveal Aang (Ringer), the last survivor of the air
nation– hence the title– and possibly the long-awaited saviour, or Avatar as
he’s referred to. The fire nation believes that the Avatar’s existence presents
a direct threat to their people; so they set about destroying him and all the
other nations that hailed his arrival.

All that jazz would be fine if it had been executed
with a sense of playfulness; but the film takes itself too seriously. There
isn’t even the slightest jab at humour, and everyone on screen looks burdened
and joyless; too dry of a tone for a family film.

Stepping out of his comfort zone, writer, producer and director
Shyamalan adapts someone else’s material for the first time in his career
and sadly exposes his weaknesses as a storyteller. Half of the film’s running
time consists of talking heads disposing of information in the most overt ways
possible. And despite all the explanation, the storyline is confusing as a
whole. Had the plot been trimmed a little (the film covers the entire first
season of Nickelodeon’s show), with less information and rules to keep track of; there could have been room for a missing emotional
layer.

Now what about the 3D? If we’re paying premium price for a premium
experience, then why does the film look better without the 3D glasses on? All
the exciting set pieces take place at night, and the 3D glasses do nothing other
than dim an already dark picture; making it extra murky and muddy.

The Last Airbender’s most interesting moments are best enjoyed out of
context. Shyamalan’s steady camera can capture a fight sequence clearly and
without a single cut; call it the anti-Michael Bay school of action.

However, Shyamalan’s
sense of visual awe isn’t enough to bear ninety minutes of agitated characters,
where half of the time it feels like we’re missing something.

Harry Potter and the Sorcerer's Stone, The Chronicles of Narnia - The Lion, the Witch and the Wardrobe, Star Wars: The Phantom Menace

A controversy surrounding the casting of white child actors in Asian roles preceded the release of the film. Shyamalan's defence was that he cast the actors according to their talent not ethnicity, an argument that doesn't hold once you watch the film.