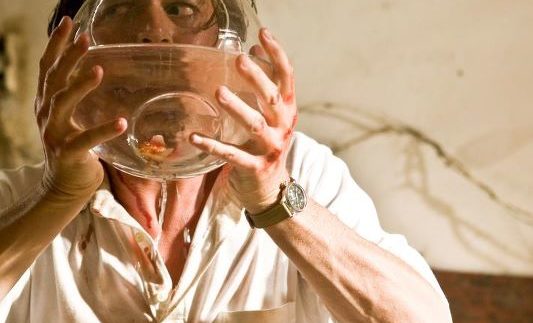 Kemp (Depp), a journalist with a bit of an alcohol problem, takes up a
job at a rundown Puerto Rican newspaper. He runs into Sanderson (Eckhart); a morally-defunct, rich
American who takes a liking to him and wants him to lend his writing skills to help rejuvenate tourism in Puerto Rico. Sanderson happens to have a
gorgeous fiancé, Chenoult (Heard), with whom Kemp has fallen in love with at
first sight. Some unfortunate clashes with the locals serve to strain the
relationship between Kemp and Sanderson and Kemp finds himself rallying against
the greedy expats milking Puerto Rico dry and treating the locals like bugs
under their shoes in the process.

Along with Fear and Loathing in
Las Vegas, The Rum Diary is a
film adaptation of a Hunter S. Thompson novel, though fans of the former should
know that the latter is in no way more of the same.

The first thing that stands out about this film is that it’s gorgeous, and not just because it stars the combined beauties that are
Johnny Depp and Amber Heard. No, this film could also double as some kind of
tourism advert. Puerto Rico is stunning be it the beaches, the carnival, the
cafés, the perfectly turquoise sky and sea; they’re all picturesque and the 60s period details only add to the beauty.
The Latin score wraps everything up to create a pretty package that looks
and sounds good and that’s all that’s important because nobody pays attention to plot, right?
Wrong.

As a whole, the film is very unfulfilling. Various plot points come up
then just fall to the wayside only to be replaced by the next story thread.
Lots of potential stories start, but the lack of follow-through has the film
fizzling out instead of ending, though it does keep you interested throughout
the majority of its running time.

Depp passes through the film in various degrees of drunkenness, though
he’s by no means the most entertaining drunkard. Ribisi
walks away with that award hands down. He plays a too-drunk-to-function
journalist with a Nazi obsession who only shows up at the office on payday and
is absolutely fantastic at it. Eckhart portrays charmingly smarmy very well and
is the epitome of the gold-digging businessman while Heard plays Chenoult; a party
girl who will pretty much flirt with anybody. The biggest gripe with that
character was the way she was very randomly written out. One second she’s in the film, the next she has disappeared leaving only a note behind. It’s a cop out and a lazy one at that.

While the film’s nonexistent conclusion doesn’t ruin it, it does put a dampener on all the things that the film does exquisitely well. So in short, the film’s not perfect but on the bright side, it features Depp
in a non-pirate role and that alone is worth the ticket price.

Fear and Loathing in Las Vegas, Where the Buffalo Roam, Magic Trip

Johnny Depp,  produced in addition to starring in the film, had promised Hunter S. Thompson before he died that he would make this film.