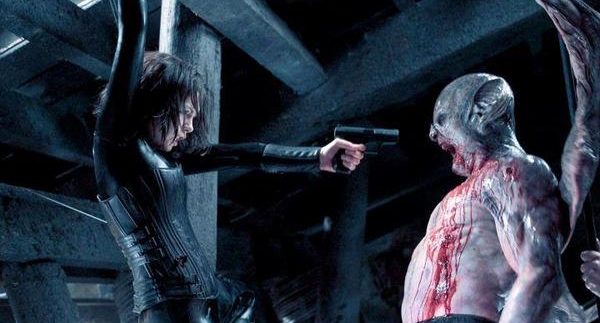 The fourth film in the Underworld series, Awakening starts
off with the vampire and lycan communities being exposed and the humans declaring
an all-out war against them. During the purge, vampire Selene (Beckinsale) and
hybrid Michael are taken captive and cryogenically frozen. Selene awakens
twelve years later in a lab to discover that the humans have won and the remaining
vampires and lycans have been driven deep into hiding. While searching for any
evidence of Michael’s fate, she runs into the young girl who freed her from the
lab, her hybrid daughter, who is being tracked by people desperate to get her
back.

Beckinsale doesn’t seem very interested in being in the film. She’s ok
when she’s fighting, mainly because the camera’s moving too quickly for you to
keep tabs on her, but when the action settles down into an emotional moment,
she seems bored at best. Her character barely seems fazed by her lost twelve
years or by the fact that she now has a daughter. She has a
going-through-the-motions vibe going on, which is completely at odds with the
heightened stakes she’s up against. That being said, the sheer amount of bodies
she leaves strewn in her wake is highly gratifying, as is the image of her
brandishing her twin guns while defying gravity.

The film is flashy but confusing, and this confusion doesn’t stem from a
lack of prior knowledge of the series, but by shoddy storytelling and lazy acting. The direction doesn’t
get a free pass either. The rapid, choppy fight scenes look impressive but are
nonetheless infuriating, especially when they make the logistics of the more
important killings vaguer than they already are.

On the plus side, though, the
stunts have a sort of balletic quality to them. When Selene jumps off of
buildings or over fences, she could almost be mistaken for a dancer if not for
her bright blue irises and icy expression. Also, the lycans look like a feral
version of Xmen’s Beast and while
they aren’t particularly scary, the scenes where they transform from humans to
werewolves are pretty cool.

The most irritating thing is how the human versus vampire/lycan war was
almost completely ignored. It was used almost solely as a set up for Selene to
be captured, completely sidestepping a perfect opportunity to forge a
connection between the film universe and the real world. This ethnic cleansing
war should have, at the very least, struck a political and emotional chord with
the audience. And while a twist in the middle of the film does bring the story
back around to how the vampires and lycans dealt with the war, it’s
overshadowed by the onscreen bloodbath.

If you’re a fan of the previous Underworld
film, this one is more of the same and may be worth a watch.