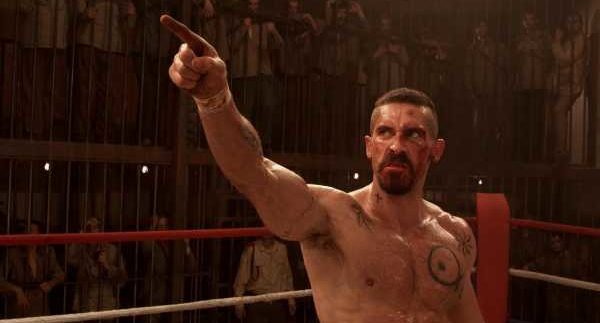 What? A third instalment of a film franchise
and it’s not in 3D? At least the third part of combat action series Undisputed defies our expectations in
one department; which is more than enough for a film that lacks any ambition at
all. In fact, Undisputed III: Redemption
sticks to its formula of death-cage matches and insane doses of testosterone. This
singularity works to the film’s advantage, giving it more energy to choreograph
bloody fight scenes and pushing the boundaries of brutality even further. It’s not
surprising then that the film completely lacks female characters– the film has
a bicep for a brain.

In a clever twist, Undisputed III casts the villain from the previous part as the new
hero. Uri (Adkins) is a master fighter with a heavy Russian
accent that suffered a humiliating defeat at the end of the last film. Now, he is almost
unrecognisable as an inmate at a Russian prison. Uri’s crippling knee injury
put an untimely end to his fighting career, but his proud soul can’t bury the
shame of his defeat. So when he hears of a new inter-prison torment taking
place, he steps up to the challenge and signs up to regain his honour or die
trying.

In typical video-game fashion, we are
introduced to a cast of ruthless fighters, each named after their home country,
and each presenting a challenge for Uri– now referred to as the Russian– so that
he can proceed to the next level. Through a series of male-bonding episodes,
Uri befriends Turbo (Jenkins), the black American fighter with a heart of gold, and
the two stick together throughout the tournament until they reach the final
challenge; a fighter known as the Colombian.

Undisputed
III: Redemption
was
released straight to DVD in the USA,
where the film’shomophobic
stance and zero-plot narrative was not suited for wide release. The film’s
training montages and iron-pumping scenes do nothing besides adding extra
minutes to the running time. However, the fight scenes showcase great vitality,
combining the acrobatic grace of parkour with the jaw-shattering ruthlessness
of kickboxing.

This is exactly what you would expect from a film that
substitutes dialogue with daring glares.

Scott Adkins is well-versed in the ways of Wushu, Tae Kwon Do, Kickboxing, Judo and Jujutsu.