The Good, The Bad, The Weird

The Good, The Bad, The Weird: Asian Action-packed romp 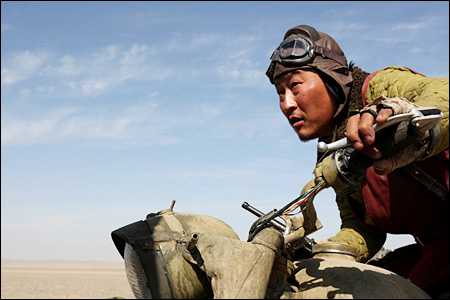 Screened out of competition at the 2008 Cannes Film Festival, The Good, The Bad, The Weird (TGTBTW)
premiered to cheering crowds that applauded after a 15-minute chase scene towards
the end of the film. The film’s representation of 1930s Korea is barely grounded
in reality; the film’s setting of the Chinese-Korean borders under Japanese
colonialism is used as a parallel to the Wild West. Without the slightest
concern about story, depth, or commentary on the period, TGTBTW pulls out all its guns to shoot one absurd over-the-top
action sequence after another with a bare minimum of a plot.

All three anti-heroes are modelled after their counterparts in Sergio
Leone’s spaghetti western classic The
Good, the Bad and the Ugly with the Weird (Song) getting the most
attention. He’s more endearing than Eli Wallach’s Tuco, but only because he’s
more of a buffoon. He ends up with a treasure map sought after by several
interested parties, one of which is a gang led by the villainous Bad (Lee). The
Bad flaunts a stylised wardrobe and looks like he stepped right out of an animé
picture with his emo haircut and black trench coat. Lee revels in the Bad’s
aptitude for viciousness; he’s everything that you want in an insatiable
villain.

The Bad has a bounty hunter on his tail
called The Good (Jung), who wants his head for his own personal
reasons. All three leads run throughout the film, either chasing someone or
being chased themselves. The masterful Asian chorography and staging gives TGTBTW its own distinct flavour that distinguishes it
from other revisionist Westerns, juxtaposing classic Western iconography with
oriental sensibilities.

The centrepiece, a 15-minute chase scene in the Gobi Desert, has every mode
of transport imaginable; horses, motorcycles, Jeeps, tanks…you name it. TGTBTW puts on a Latino instrumental
version of ‘Don’t Let Me Be Misunderstood’ and lets it all play out to a blast.
It’s overblown but never overwhelming.

Aside from some odd slapstick here and there (the film’s affinity for
physical comedy might be off-putting for some), TGTBTW is as flawless as oriental-bombastic-Westerns can get. Right
from its opening with a memorable train siege; the film sets the rules and makes
its intentions known: we’re about to embark on a fun ride, so buckle up: it’s going
to be mind-blowingly fantastic.

The Good, The Bad and the Ugly; Kung Fu Hustle; Kill Bill

At US$17 million, this is the most expensive South Korean film made to date.