Whip It!: Sugar, Spice and Everything Nice 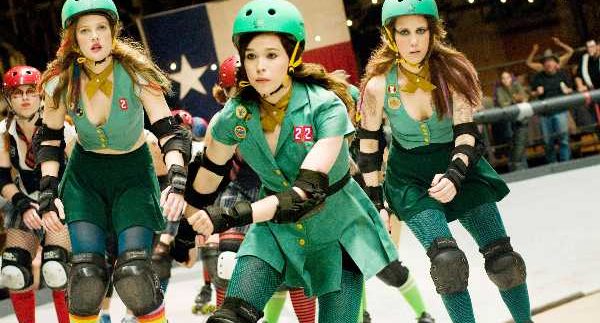 Whip it! is an immensely
adorable film. Although the plot is left on autopilot, taking us through a
familiar road while making stops at all the usual checkpoints; it ends up somewhere
interesting– more power to director Drew Barrymore, who
successfully infected Whip It! with her
irresistible charm.

It doesn’t even matter if
you know nothing about roller derby (or know it at all), Whip It takes care of that by quickly explaining the sport. Think
girl skaters who listen to riot-girl music and cover their bodies with ink, and
you’ll get the picture. Bliss (Page) doesn’t know much about
roller derby herself;
that is until she sees a flyer in some thrift store in Austin, Texas
and thinks that it would be a great place to meet cute boys. She drags her best
friend Pash (Shawkat) to go and watch their first game, and she loves it.

Moving ahead with ease, Whip It! doesn’t face threatening
obstacles. Knowing that her mother won’t be exactly thrilled about her oldest daughter
skating in fishnets, Bliss simply goes behind her parents’
backs and eventually she gets busted.
Whip It! is not about strong
conflicts, but about how social outsiders confront their own inner demons. The
tale unfolds with equal part delight and maturity. The inconsequential threats that
Bliss dodges give enough room for the intimate moments to breathe.

Bliss, who now goes by the
roller derby name Babe Ruthless, joins a derby team. Barrymore
plays Smashley Simpson, and along with Maggie Mayhem (Wiig), Bloody Holly (Bell)
and two other girls, these rollers make up the Hurl Scouts; the league’s most
beloved team.

The girls bond together on and off the track in the spirit of
girl empowerment. However, the strongest jolt of empowerment is delivered by
Juliette Lewis as Iron Maven, a 36-year-old roller determined to prevent Bliss from stealing her thunder that easily, even
though deep down she respects her the most.

Usually words like cute,
charming and sweet sound patronising, but in the case of Whip It! they are honest-to-god complements. You will want to
embrace Whip It! after it’s over. Inspired song choices, a
charismatic lead and a great cast (Wiig finally gets to play a
real character, not a humanoid joke set-up), and even though it’s girly, it
never feels embarrassing. Whip It! is a feel-good
film too sweet to resist, too cute to look away from.

In Whip It!, Page plays a 17-year-old pretending to be 22, while Page was actually 22 at the time of filming.