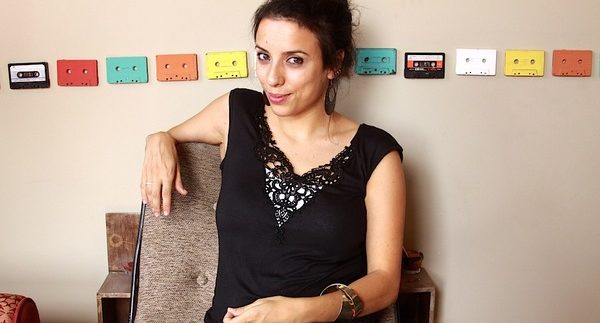 Bored of drab bath tiles? In need of an illuminating light switch? Drumstick Designs’ Sherine Abdel Rassoul seems to think so.
“I start with something that we overlook in everyday life and I try to give it some soul” says the founder of Drumstick.

Since her debut line of light-switch and tile stickers in 2010, Sherine has built a niche of ‘tackable’ art that makes ordinarily dull, ignored spaces into chic, eye-catching accents.

“I just wanted to have affordable, beautiful things that you can chew and over-chew, throw out and buy another one. It’s okay, you can do that”, she says, adding that the most functional pieces of art available in Cairo are imported and overpriced.

The 29-year-old designer and self-starting entrepreneur gave Cairo360 an insider’s tour of her studio situated in the potter’s enclave in Fustat, nearby the popular art hub Darb 1718. The Drumstick Designs headquarters speaks volumes of its quirky mastermind, who shies away from the pressures of being labelled an artist.
The second-story atelier is an eclectic mixed bag of vintage Egyptian film posters, windowpanes lined with wallpaper made of clippings from the Arabic version of Where’s Waldo?, a bottle-cap-studded coffee table, paint-dipped cassettes, and a craft maker’s wooden dream: a panelled workshop hinged with an assortment of gizmos and tools all in plain view.

From here, Sherine’s ideas materialized including a set of sustainable furnishings that were recently exhibited at “Design is a Verb” at the Bibliotheca Alexandrina in Alexandria and Drumsticks trademark collections of sticker treatments. The green living room was constructed from upcycled materials and showcased an aquarium made from a retro television and chairs made from latticed plastic bottlework.

The stickers are more than just fancy designs, Sherine argues, and are allusions to a heritage that Egyptians should learn about and take pride. The American University of Beirut-educated business major goes on to protest against the way globalisation has homogenised aesthetic ideals—think Ikea.

“It doesn’t make sense to neutralize all the houses in the world. You can have modern houses across the globe, but those that stem from its own culture and its own roots. You can’t just chop the evolution of something and put something else because it was marketed better. Let’s take what we already have that has hundreds of years of work into it.”

Each Drumstick sticker series centres on a school of design and thought in Egyptian history. The first line captures the geometric patterns of Islamic, and more specifically Mamlouk art, while the second is a take on mid-20th century print models.

“Back then, Muslims believed the way to get closer to God was by perfecting your Arabic, your poetry and your geometry; that was the biggest thing. The more perfect your angles and lines are the closer you get to perfection. That’s why Islamic design is so intricate”, she explains.

In researching Islamic art, Sherine took walks through Old Cairo, photographing door handles and fixtures and working them into vector patterns. The women featured in the second series, posterised in heightened hues and pop tones, were taken from Egyptian magazines from the 1940s to the 1970s that at the time were drawn or cut out of film and hand-painted.

“One woman was the wife of a football player that he then decided to dump for another woman. Another woman was a model in a competition. I made a point to choose random women. No fancy actresses or stars, these were women who dressed as they would when they walked on the streets”, she says.

Sherine is planning future collections dubbing the styles of the Fellahin, folkloric, Nubian and Pharoanic. Each package of tile stickers comes with eight different images and starts from 50LE, while a single light-switch metal panel sells for 35LE.

Find Drumstick Designs’ adhesive creations at Studio at Zafir in Zamalek or at other Cairo locations; furniture designs are made to order.