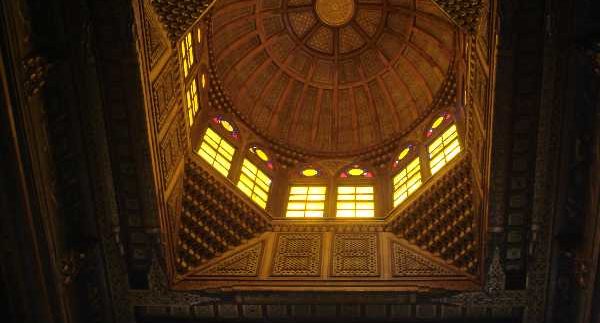 There’s an eerie sense of calm around you as you walk down the large
stone stairs towards the cool entrance of El Ghouri Complex off El Azhar
Street. As the open courtyard draws you further in, it’s as though you’ve been
transported to another time.

Built from 1503 to 1504 by Sultan El Ghouri at the end of the Mamluk
dynasty, El Ghouri Complex was the last large-scale complex to be built
before the start of the Ottoman dynasty. This grand complex is comprised of six
main sections; a mausoleum, the Khanqah (settlement for Sufi mystics), an open
courtyard, a mosque, a madrasah (religious school) and Sabil (water charity).
From the start of its restoration in 2002, the complex’s Khanqah, mausoleum and
open courtyard have been used as a space for a variety of cultural
performances.

A dark passage leads you towards the inviting light of the open
courtyard, which can host up to 150 individuals. The courtyard is surrounded by
beige and peach high stonewalls adorned with Islamic calligraphy. Scattered
stained glass windows and wooden mashrabeyas add to the overall historical
sentiment of the complex. The performance stage is, at most, three feet away
from the first row, creating an intimate atmosphere between the audience and
the performers. The open courtyard is mainly used for performances in summer,
when weather conditions are not too harsh.

If you take a right up the stairs that lead you towards the Khanqah,
there’s a completely different atmosphere to the location. Light filters
through the stained glass windows, with dark ebony frames creating the sense of
divine presence. The Khanqah’s dome is also adorned with stained glass windows,
ebony wood and Islamic geometrical shapes. It is in and of itself a masterpiece.

The mausoleum or El Ghouri Dome also
hosts various performances, though less than Khanqah and the open courtyard.
Inside this dome, the articulate craftsmanship of the decorations on the stone
walls makes it seem as though the walls are covered in delicate off-white lace
and not stone. A belt of engraved verses from the Koran engulfs the four walls.

El Ghouri Complex hosts numerous cultural performances with the aim
of reviving Egyptian culture throughout the year. Some performances have a
spiritual focus such as Atyaf Al Mawlawiya, a sufi performance.

El Ghouri’s in-house performance groups, Samaa, Nubian Drums and Peace
Message only perform at El Ghouri. The most unique in-house performance is
definitely by Peace Message. The performance combines Samaa (a Sufi recitation
group), a Coptic choir, an Indonesian recitation group and a Christian choir.
This fusion of cultures represents a unique spiritual experience and a message
of unity beyond difference.

Ghouri also hosts one-off performances by visiting troupes such as the
theatrical performance Glass Wheels from Greece, among others.

Entry to the cultural performances is free, while
visiting El Ghouri before 6PM incurs an entry charge. El Ghouri produces a
monthly schedule with all performances. They have set performances for their
in-house cultural groups every first and third Sunday of the month. Their full
schedule is available on location and on their website.