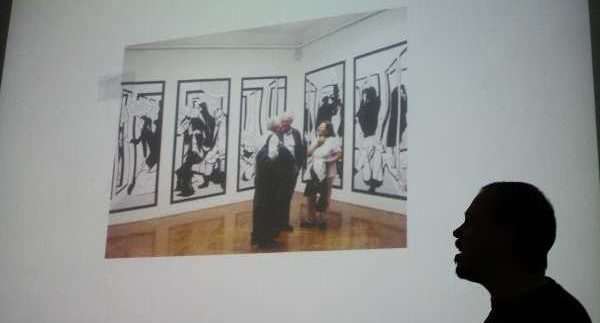 Comic books are all too often assumed to be for a young audience, but Catalan artist Francesc Ruiz is about to convince Cairo otherwise. Ruiz is the Contemporary Image Collective’s (CIC) new artist-in-residence who playfully transforms comics into visual and sociological narratives. He’s only been in Cairo since mid-April, but he has already given a talk on what experience he’s bringing to Cairo and what we can look forward to for his solo exhibit in October 2010.

Ruiz’s artist talk on May 4, 2010 was the first public event held in CIC’s new Downtown space. The lecture explored the artist’s fascination with how his audience interacts with exhibit space and the larger city through his work. A trademark of Ruiz’s work is the quality of being both city- and space-specific. Standing on its own, removed from the space and the city, the artist’s work wouldn’t make sense.

Ruiz, who likens comic books to a language, spoke on how his earlier exhibits engaged with his native city of Barcelona . In one exhibit in a baroque-looking space, he chose to feature several illustrated versions of the Bible that varied in period, language and style. They were laid out in a formal glass display, as Bibles and other ancient manuscripts often are displayed at museums.

To compliment these works, Ruiz wrote his own comic book of how exhibit viewers might interact with these various comic-book-style Bibles. Ruiz’s book was essentially the audience members talking about the work amongst themselves. The artist enjoys putting his audience in the same narrative space as the characters in his comics; so that the comic is not only special to the place, but the experience itself is also unique. This way, what the audience members end up looking at is essentially themselves; a common theme in several of Ruiz’s works.

Two of the artist’s recent residencies were in Bristol, UK and Philadelphia, USA. Rather than applying his own experience and interests to these international cities, Ruiz likes to soak in the city and create a reflection for the audience that is based on his experience. In Bristol, Ruiz made an exhibit about the shops in a working-class neighbourhood. A narrative on money, the exhibit showed how shops in the city were seemingly obsessed with finance. From charity shops to second-hand stores to casinos; Ruiz wanted to capture the emphasis on wealth that had struck him.

In Philadelphia, Ruiz recreated a colourful street kiosk full of excitement and media attention. The kiosk appeared to be filled with different comics and newspapers that he had designed. Viewers that actually chose to engage with the work and pick up a magazine noticed that the magazines were composed of only covers. The kiosk was essentially an illusion of lots of material but only truly consisted of two publications: a newspaper filled with front pages and a magazine filled only with covers. Again, the audience’s interaction will the space is crucial for Ruiz’s art to make sense.

So what is this comic mastermind planning to do in Cairo ? Well, you’ll have to wait and see, but he has already given us some clues to stir our imaginations. Since his arrival, Ruiz has already taken to the crowded streets of Downtown Cairo and conducted some preliminary research on the history of local comic books. Drawing inspiration from comic characters that are on Cairo ’s historical radar, Ruiz is hoping to interact using narratives of Tin Tin, Samir, Donald Duck and characters from the comic book Flash.

Ruiz spoke of his visit to a bookstore in Talaat Harb Square, where he asked for comic books and was given a photocopied version of a well-known comic book. Ruiz commented that he loved the idea that what he was seeing wasn’t actually drawn by someone who draws professionally.

The artist also loved the use of photocopies and carbon paper, and he couldn’t get enough of the transparent way that the comic book was created. The tape and the lack of a grid system seemed very raw and quite perverse, compared to how contemporary comic books are manufactured. Cairo can guess that whatever Ruiz comes up with in the end will likely play with a layering effect and have a raw production process.

As for Ruiz’s artistic signature of engaging the audience with the space inside the larger city, it’s exciting to think of what he’ll come up with while staying in our city’s buzzing centre. October couldn’t come sooner, if you ask us. Francesc Ruiz is one of the most exciting prospects to come to the Cairo art scene in a long while.