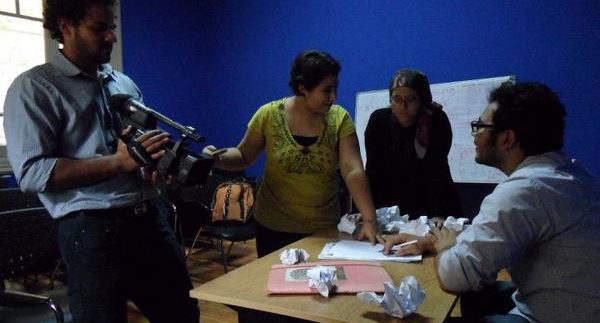 We’re in the middle of awards season and Cairo has been swept up in the hubbub. But
instead of handing out ridiculous prizes like ‘Favourite TV Celeb-reality Star’ or
‘Favourite Country Star’, the Golden and Silver prizes will be handed
out during the Masry Asly film festival taking place in Cairo this January.

From January 19th
to 22nd, the Italian Culture Centre in Zamalek will
host the travelling film festival, which has been put together under the
auspices of Rising Stars; a project that is partially funded by the EU.

What’s
unique about the Masry Asly film festival is that it is only one piece of
the puzzle. More than just providing the festival as a platform to showcase
filmmakers’ work, Rising Stars also runs comprehensive workshops in directing,
cinematography, scriptwriting, sound and editing. Enthusiasm, creativity and
that one brilliant idea is always the base for embarking on any cathartic
endeavour, but Rising Stars’ approach is refreshingly grounded. There will forever be pretentious auteuristic
notions and romanticism surrounding filmmaking, but Rising Stars emphasises the need
for technical proficiency, because without the know-how, even the best idea will
remain no more than just an idea. So, more than just providing filmmakers with
exposure, Rising Stars empowers in the most basic of ways.

The festival is divided into three
separate parts, the first of which will screen the fourteen short films that will
vie for the golden and silver awards starting on Friday 20th. Contemplating the awards is
a panel composed of director of photography Mohamed Abdel Raouf and directors
Hala Khalil and Tamer Ezzat. An extra prize will be awarded based on the votes
of the festival’s attendees. Many consider this facet of the festival to
potentially be the most important, as it gives a reflection of the ‘new
generation of young Egyptian filmmakers’; a phrase used very liberally by the
organisers.

We are eager to see Maslaha
by Tamer Atteya. This eight-minute film is about a group of people waiting for
a minibus to Imbaba. Also on Friday is Cold January by Romany Saad. This
short film focuses on a single mother struggling to make ends meet and be able
to pay for a door for their one-room apartment to keep her children warm from
the chilly January weather. Hany Fawzy tells the peculiar story of a 50-year-old
who suddenly receives a love letter from an unknown woman in his film Date.

On Saturday we
can’t wait for A Window Overlooking Tahrir by Amr Bayouny, which recaps the
events in the Tahrir from the early morning of January 25 until the evening.
Also screening on Saturday is The Doll by Marouan Omara. This film deals
with the practice of marrying of young Egyptian girls to old, rich Gulf-men. Another interesting film on Saturday is the nostalgia-themed 3D
Negative by Yosreya Ghourab.

Another section of the festival has been
dubbed ‘Masry Asly Extra’ and will present screenings of some of the most significant
films to be made on these shores in the last few years. The opening ceremony on
the evening of Thursday 19th will be followed by a screening of the
award-winning The Good, the Bad and the
Politician. Through this feature-length documentary, Aymen Amin, Tamer Ezzat and Amr Salama
document the January 25th revolution; not just through their own
personal accounts, but through exploring all the elements that made the
revolution what it is. In addition, Tahrir
Benghazi and Living Skin will be
screened on Friday, while a Saturday evening Q&A with the filmmakers will
follow screenings of Payback and Knocking the Doors.

Sunday is the
final day of the festival and focuses on the third section; the Rising Stars
films that were produced during the workshops. The film First Time in Tahrir
by Ahmed Hamed focuses on main character Hamed, who explores freedom in an open
society for the first time. It’s not all about the revolution, though; as Ghareeb By Nada Zatouna follows the daily life of a
police informer/sheikh/actor from Imbaba. Made of Glass by Nadine Salib
and Sameh Alaa portrays a group of hemophilia patients longing for a normal
life.

The award
ceremony will take place on Sunday evening starting at 9PM. All screenings will
be held at the Italian Culture Centre across from Beano’s in Zamalek. All films
are subtitled in English and attendance is free of charge.