Shaware3na: Live Art Perfromances Seeping Through the Streets of Cairo 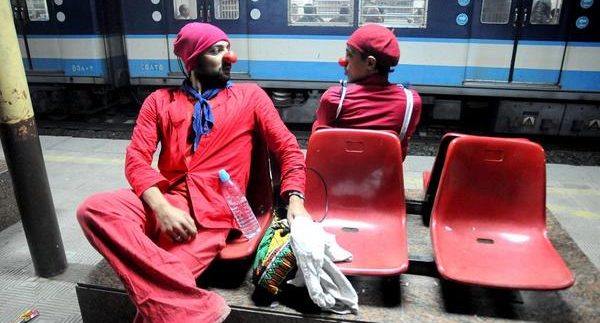 As part of the latest spurt of the artistic frenzy that has overtaken
Cairo’s streets in the past year, Shaware3na comes as the launch project for Mahatat;
a newly founded arts organization that promotes art in public spaces. Shaware3na
runs from 18 January to 23 June.

The first of four projects under the umbrella of Shaware3na is Art of Transit. “There are so many
people who do stuff on the Metro – some people sell stuff, some read from the Quran
and none of these people have permits or is operating under any official
capacity” says Mayada Said, co-founder and Fundraising and Communication
Director. “We thought it would be a good idea to bring art to people commuting
everyday to and from work”.

Art of
Transit brings four distinct performances to the Cairo Metro wagons. The
line-up includes a pantomime performance by Amr Abdel Aziz; Red Tomato – a clown performance by Ali
Sobhi and Ahmed Mostafa; invisible theatre by Hara TV (Nada Sabet and Sally
Sami); and Bussy by Mona El Shimi and
Sondos Shabayek. Art of Transit has held
a total of sixteen performances so far and Mahatat is considering doing a
second edition of the project.

Mahatat was co-founded by five women from different national and
professional backgrounds: Astrid Thews, Heba El Cheikh, Marie Girod, Mayada Said and Myriam Makhoul, all of whom have
worked in the arts and culture scene in Egypt. “We didn’t want another art
space or gallery, but to operate in public spaces and to address an entirely
different audience,” says Said. For those who frequent the theatre, it is
common knowledge that, while these art spaces theoretically cater to everyone,
they draw a somewhat limited audience.

In utilising public spaces, Mahatat aims to reach a broader audience and
give artists a different kind of exposure than the traditional gallery or
theatre. “It’s important to have theatres and galleries for people to exhibit
and perform in safe spaces, and these cater to a specific audience. There are
artists that have always wanted to perform in public space but some were
uncomfortable doing so. We thought that if we organise it for them, they would
be more willing to go out there and we hope that they continue to do so on
their own” says Said.

The organisation has three components, the first being Mahatat in public
space. The other two components include Mahatat young talents – an initiative
that aims to encourage and support creative youths and finally, Mahatat
networks – an effort to connect artists and specialists who work in public spaces
from around Egypt.

Surprisingly, Mahatat is also working on a business component to make
the organisation financially independent. For now, however, Mahatat receives sponsorship
per project, with the main sponsor of Shaware3na being the Danish Egyptian
Dialogue Institute (DEDI); additional sponsors include the British Council and
the German Embassy in Cairo.

And while Mahatat aims to build on and connect with people already
working in the art scene, they are also making an effort to reach out to those
who are not part of the art community in Egypt.

“Our target is both the passerby and people who come to see the
performances deliberately, depending on the project,” says Said. In the case of
Art of Transit however, performance
times are not announced to the public since it is difficult to predict when the
performers will be in each location. Performers literally jump in and out of
carriages and often do little sketches in the stations in between; so slotting
it in to your schedule may be near impossible.

Art of Transit has been invading
the streets of Cairo since the end of January and while audience reactions have
been mixed, most have been positive. “A lot of people have been very
supportive,” says Said. “We had an incident with Red Tomato where the two clowns were going up the stairs in
slow-motion, and everyone was watching and laughing – including 10 policemen.
We’ve actually had more problems filming the performances than we have actually
staging them,” notes Said.

With Bussy, however, it’s a
different story. According to Said, some women have become emotional upon
hearing the monologues and have wanted to share their own stories. Similarly,
with Hara TV, which tackles the issue of sexual harassment, many audience
members have got involved in the conversations and given the performers tips on
how to handle difficult situations.

After almost two months of Art of
Transit, Metro users are becoming more accustomed to seeing the
performances, and the performers are quickly gaining confidence. Said also
noted a few incidents where passengers have offered their personal support and
encouragement to performers.

And while Mahatat is providing artists with the opportunity to perform
in public spaces, they are not claiming it as a right; they take the time to
explain it to people and respect if people don’t like a performance and don’t
want to watch it.

“When people go to a theatre, they expect to see a performance, but this
is not the same. We try to pick performances that are presented in a way that
gives people the choice to watch or not to watch” says Said.

The second project by Mahatat – Stop
& Dance – brings together Egyptian, German, and Portuguese dancers; it
focuses on site-specific dance and performances in public space, the end result
being performances in the Metro stations.

The third project is Public Screen
which includes screenings of international and local video art in public
spaces. Mahatat is also organizing a local initiative titled The Tree Project through which they will
hold workshops for young people of the Soliman Gohar neighbourhood, designing
trees using sound / light installations.

So, take the metro more often- you may be pleasantly surprised. For more information on Mahatat, check out their Facebook and Twitter pages.