The Tentmakers’ Market: Take a Glimpse into Cairo’s Fading Past 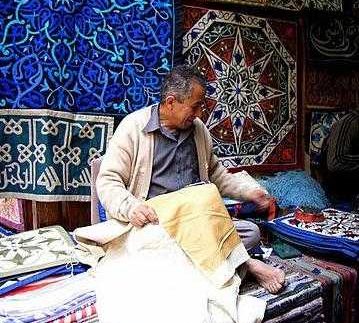 While Egypt is one of last places in the Middle East where the craft of Tentmaking still thrives, this intricate art form has been facing some struggles. With the new generation losing interest in continuing the work, machines taking over traditionally hand-made items, and store lofts being converted to flats; it’s becoming hard to stay competitive.

Mostly inspired by the marble inlay in medieval Mosques, tentmakers are innovating new designs to stay interesting, and instead of traditional tents, now focus on more relevant household items.

You can discover some of Egypt’s textile legacy for yourself by visiting the enchanting street market just past Bab Zuweila. In a part of town that feels stuck in another time, merchants continue the centuries old art of appliqué, which traditionally decorated the tents of nomadic Arab tribes, and often you can witness the making of their handmade crafts first-hand.

Beautifully decorated pillow cases, blankets and wall tapestries adorn the shop interiors and doors, and every now and then you’ll come across mini stuffed camels and their matching mini tents for little ones.

These labour-intensive textiles are slowly going out of style, but some, like the boutique hotel Le Riad Hotel De Charme located on the same street near Bab El Fotouh, are trying to keep the craft alive by showcasing the textiles in their exclusive classically thematic rooms.

Merchants are more than happy to show you their wares and don’t mind giving demonstrations.  They can also take custom commissions and personalise tapestries, framing and even wedding favours such as placemats.

A small pillow case or canvas messenger bag will set you back about 30LE, but for larger pieces expect to pay 500LE plus.  Designs vary from Arab, Persian and Turkish patterns, to scenes of birds nesting in trees or fish in the sea, to Pharonic themes, to artfully stitched verses from the Koran.

The old heritage street has an enthralling atmosphere of old-world charm and is definitely worth a visit even if you’re not in the market for textiles.  It will be hard to resist buying up a piece of history while exploring but it’s worth it to take an afternoon to appreciate that this place still exists; don’t leave without contributing to their art.

A little bit of history:

Souq El Khiamiyya, one of Cairo’s last and only covered markets, was built in the 1600s, and is actually a section of Muizz El Din street which stretches from Bab El Fotouh all the way to Fatimid Bab Zuweila. The shops themselves have been around for over 150 years and were recently renovated following extensive damage due to the 1992 earthquake.  The craft however, has been practiced for thousands of years with the first example dating back to around 2500BC. The appliqué craft involves first creating the design and outlining it on fabric by dusting carbon powder through perforated paper, then the shapes are cut from coloured cloth and sewn in place on the background.