Though there’s still much debate on the subject, those familiar with the often addictive fantasy world of comic-books and graphic novels insist that the platform is a legit form of art and literature – and it’s hard to disagree. Comic-books have been shown to be just as challenging, thought-provoking and powerful as any other medium.

Fuelled by our own love for comic-books, we sought out witty Egyptian comic-book artist, Sherif Adel – A.K.A  Ragol El Barbatoze – to talk comics in Egypt and his latest work, Foot 3alina Bokra – a series depicting a futuristic Egypt forming a top secret team to overcome a potential extra-terrestrial invasion – with hilarious results.

As well as being a comic-book artist and writer, you’re a practicing dentist, too – what prompted the career shift?

It’s not a career shift – it’s both. I’m a dentist by trade and illustration is kind of a side job. I’ve always loved drawing and I had a bit of obsession with comics and video games growing up; an obsession that stayed with me until I began taking it seriously 4 years ago when I started the Barbatoze comics website.  I like having two careers; it’s kind of the best of both worlds, but if I ever felt that one path is better for me to follow, I wouldn’t hesitate to do just that.

Here’s something we’ve been dying to ask – what in the world is a Barbatoze?

It doesn’t mean anything! Technically it’s the name for a baby onesie. I chose it because it’s intriguing. I wanted a name that would make people wonder, so that, ultimately, it would stick.

Maybe. I’m always bored and I largely think everything is kind of dull; so yeah, his face perfectly captures my inner feelings most of the time. 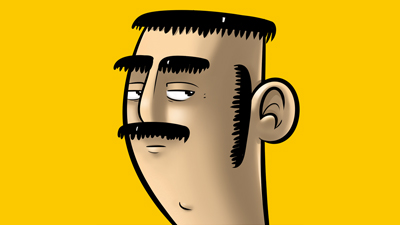 Going back to how it all started, one of the very first things you did was to create the Barbatoze Comics Website. How did it all come to be?

When I first decided I wanted to take my love for drawing and comics to the next level, I didn’t have any contacts in the field, nor an audience. With my simple knowledge of web design, I put together a blog to publish my work; I shared it on Facebook and Twitter to gain an audience and to receive feedback. It gave me the chance to improve and evolve as an artist, too.

Then I entered comic competition, El Fan el Tase3 (The Ninth Art); I won with and my work was featured in a book called Enta 7or. Thankfully, I was able to make lots of contacts that later on helped me reach my initial goal to publish my own comic-book series.

Your latest work, Foot 3alina Bokra, has been a hit thus far, largely for its characters – tell us more about them.

There’s Fahmy, the leader of the Foot 3alina Bokra team, Ram the martial arts expert, Sahar the computer science whiz, the commander in chief of the scientific secret service – which we can’t disclose any more information about due to security reasons, of course – and Naguib; a genetically modified donkey and my personal favourite character. He’s my favourite because he came into this world not by his own choice and, ever since then, he’s been constantly wondering what he’s doing in this strange world and I can definitely relate to that.

It’s a pretty abstract concept in the context of Egypt. What triggered the idea?

At first, it was meant as a parody of the Egyptian sci-fi series, Malaf El Mostakbal, because I’ve been a huge fan since I was a child. I think you can see the influence in the comic-book itself – I slip a lot of references throughout the issues. But as the story evolved in my head, I began feeling it would undervalue the story if I went ahead and wrote it that way. With that in mind, it began to take a different shape. I wanted a sequenced story that flowed, with every issue picking up from where the previous one left off, leaving the audience wanting to find out what’s next. After publication, I’m pretty much sticking to that vision. I already have the plot all figured out, so I’ll just be adjusting and tweaking small parts as I go on, based on the feedback and response I get. The feedback has, thankfully, been mostly positive, although I’ve been sent several requests to increase the length of each book, which is something we’re working on.

Things are really going well – knock on wood – but that can’t have always been the case. Did you face any Egypt-specific challenges in bringing your vision to light?

The biggest challenge – which faces pretty much everyone in the field – was publishing. Most publishing houses I’ve dealt with in Egypt don’t really ‘get’ comic-books; in their heads, they’re more children’s books. Most comic-book publications in Egypt are funded by companies like Garad Media, like I am. The second challenge was a personal one. I didn’t have enough talent or practice in the beginning to produce something I was truly happy with. Before Foot 3alina Bokra, I had a project called Thawret El Zombies (Zombie Revolution), which didn’t exactly turn out the way I wanted it, due to my inexperience, so I quickly discarded it. I do both the writing and the illustration on my own, so I wanted to be sure that I’d end up with something deemed worthy of all my efforts. Another challenge has been – and continues to be – the relatively low reach of the Egyptian comic-books market being limited to a small community. Not many have the taste for it, which is something I hope changes with the many projects that have been appearing, like Toktok. I really believe comic-books have the potential to grow and reach more people in Egypt.

There’s lots of little references, jokes and ‘easter eggs’ – do you have a favourite?

My favourite is in the second issue; there was a large picture of the city and in the midst of all the hustle and bustle, there’s a statue of a certain major-general and his celebrated kofta invention – that’s definitely my favourite. 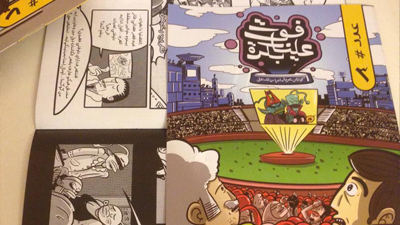 In all seriousness, though, can Egypt cope with an alien invasion?

Oh, we’ll all be screwed – even more than we already are! We’d treat it with classic Egyptian humour, but, as a country, the response would be disastrous. Chaotic. We don't approach anything sensibly.That’s not even in our dictionary. Actually, thinking about it, I think the invasion might be an upgrade.

If you could bring any two Egyptian personalities (one male, one female) back to life, who would they be?

Wow, that’s a tough question. That’s a really tough question, but I would have to say Ismail Yassin. He makes me instantly smile; I love the guy so much and there are films of his that I’ve watched endless times which still crack me up to this day. As for a female, it took me a lot of thought and consideration, but I can’t find a better answer than Mervat Amin – even though she’s still alive. Can we say the young version of Mervat? Specifically the Mister X one? Why? Because, simply, she’s beautiful.

As an Egyptian that has revelled in a niche field of art and literature, what advice would you give to other comic-book-artists-in-the-making?

The best piece of advice I have for any career is do whatever it is you love; do what makes you feel happy and alive. If something actually gives you more energy and passion instead of draining it, never let it go, no matter how unsure or risky it seems in the beginning. That’s what I tried to do and I’m thankful I did.