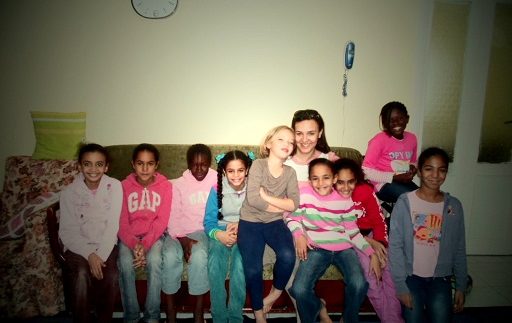 If there’s one thing all Cairenes encounter every day, apart from traffic, it’s poverty. As beautiful and vibrant as our city is, it is home to thousands of impoverished citizens, who roam the streets of the great city selling tissues, lemons, flowers, or simply begging for money. Quite often these faces we awkwardly avoid from inside our cars are those of children and so we feel all the more ashamed and uncomfortable, fumble through our pockets for a few coins to give them, and drive on. But for some people this is not enough. One such person is Dina Ramadan, founder of Amalna; a small orphanage in Nasr City that is home to eight young girls.

Though it is one of many orphanages in Cairo, Amalna is a special little flame of hope to all those who know it. How did it all begin? During university Ramadan was encouraged by one of her professors to always do as much charity work as possible for her community. She began visiting orphanages, slowly realising that even in the seemingly clean and well put together places, there was an unfortunate sense of detachment and a lack of emotional attention among many children.

She decided that if she was ever to undertake such a project, it would be a small and humble effort to create a real family and home for those who had at so young an age already lost both; and this, as many would surely  agree, has been her biggest success.

The girls were adopted from state hospitals one by one, about a month apart, when they were just days old. Ramadan consciously targeted girls; having grown up in a family strongly dominated by boys she was “desperate for some pink”, and now she has it in abundance.

The girls were all raised as sisters, and were taught to know only Ramadan as their mother. This stands in contrast to many orphanages where staff and even visitors form part of a stream of ever-changing ‘mothers’, none of which ultimately fill the role. Nonetheless, Ramadan has never led the girls to believe that she was their biological mother – not that she could get away with it. The girls are extremely clever; ‘too clever’, she admits laughingly. From the start she has been completely honest with them; telling them all she knows about their past, but teaching them also to understand that a lot of it will always remain a mystery.

However, what matters more than the past is the present, the tools with which these girls are being equipped to step boldly into their futures. Ramadan stresses her belief in the importance of education and accordingly she chose to send them to a private school, despite the inevitable financial strain. She explains that “They are already disadvantaged, and so giving them a solid education is all the more important, maybe one of the most important things we can give.”

This is particularly relevant given that these girls are growing up in a society that is not as accommodating to them as one might hope. “It may be surprising, but the biggest challenge we face is society” Ramadan says. This includes the rejection these girls continually experience at school. They have often been shunned by many of their peers, who are instructed by their own parents to stay away from them, simply because they are orphans. Scandalous as this is, it is an unfortunate truth that she and her girls struggle with everyday.

People tend to be more compassionate from a distance, which is one challenge. Another issue is that there tends to be more sympathy for babies, although growing children need far more food, clothing and attention.

“Every year it gets more difficult. People see that our place is clean, that our girls are well-dressed, so they think we don’t need much. But we do if we want to maintain it as it is” Ramadan says.

How does Ramadan manage it all, practically and financially? “We rely a lot on donation, and on the support of a close-knit community of family and friends. We also hold a bake sale twice annually. It’s our only fundraising event. But again, it’s the same familiar faces – no members of the public.”

Some donate food on a monthly basis, some donate clothes, though there never seems to be enough of either. Others donate their time and money. But over the past few years, in light of the political turmoil and its toll on the society and economy of Egypt, people have been far more hesitant. According to Ramadan, “They stay in their little bubbles and don’t really leave their houses as much as they used to, but who can blame them? Everything is so uncertain.”

How can we best help Amalna? Monthly donations of essentials such as eggs, milk or meat are always welcome, as is the donation of clothing suitable for eleven year old girls – second hand is of course fine, as long as it is clean and in good condition. Another excellent way of helping the girls, and actually meeting them in person, is organising, financing and chaperoning a day trip. In the past they have been to Dreamland, Al Azhar Park and the Gezira Sporting Club. They even have a mini-bus to carry them all – all it really takes is willing volunteers.