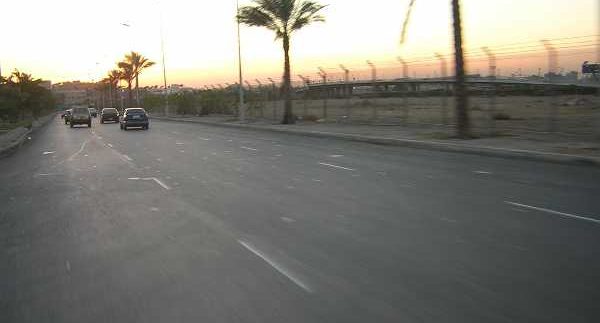 The sign
reads ‘Coming in the Fall of 2010’, and we think to ourselves – is it a mall that
will be coming, or is it the arrival of the metastatic traffic cancer gripping
Cairo? The answer to both is, sadly, yes.

We
apparently do not have enough malls in Cairo,
and certainly not enough in the Heliopolis-Nasr
City area. That’s
sarcasm, folks – we do have more than enough, but for some reason, developers
see and empty plot of land and think ‘mall!’ instead of ‘park’ or at least ‘where
will the mall goers park?’ As a resurrected Gordon Gecko ( from 80s cult classic Wall Street) would remind us; greed
is good, and in Cairo,
malls are the best example of said greed.

The mall in
question is Sun City, whose location on the airport road (aka the Autostrad)
linking Nasr City to Masaken Sheraton is guaranteed to bring us new cinemas, a
water park, a hotel and a wealth of
shopping options for the residents of Masaken Sheraton who think that Citystars
is too far away. Masaken Sheraton is a pleasant suburb; it’s mainly residential
and named after the Airport Sheraton (now the Fairmont Heliopolis & Towers)
nearby.

Take a
moment and try to remember what Nasr
City was like before Citystars.
Over 300 stores selling clothes and food attract thousands of visitors a day,
each with their own car and a healthy reluctance to utilise the paid parking
garage underneath the complex. Add to
that hundreds of taxis loitering around and an ineffectual traffic monitoring
system; and you’ve got the mangled traffic mess that is Nasr
City. All roads leading to and from Citystars are clogged like the arteries of
an obese man too greedy to put down the lamb chop in his hand. In this analogy,
kids, Cairo’s
roads are the clogged arteries and the lamb chop is the unhealthy and unchecked
expansion of commercial outlets.

It’s here
that we will cut our tirade against wanton consumerism– in a country where 60%
of the populace lives below the poverty line, no less– short. We will, instead,
begin our eulogy to the unlamented victim of this latest development; Cairo’s greatest and last
road.

It starts
in Nasr city’s 8th district, past El Ahly Club and over the ‘4.5 km’ bridge over
the Cairo Suez Road.
Sliding off the bridge, the driver coasts along, blue sky and green medians
stretch out as far as the eye can see – and then a gentle sloping turn to the
right; past a cute little mosque. The gradient gets ever so steeper as we climb
towards airport territory.

On the right, you will find a Watania gas station
with one of the busiest and best car washes this side of Cairo. Follow a hard left turn, and the slope
climbs then drops. On the right is the fence bordering the Cairo
International Airport, and further down is the exit taking you directly to Terminal
3. Another 90-degree left turn, a few hundred meters   further, and a flyover bridge obstructs the
sky briefly as we turn into the final left turn, downward slope, and the home
stretch to Masaken Sheraton. On the right hand side is the Oasis; an outdoor
collection of cafés and restaurants raised out of the barren sands that used to
belong to the old Cairo Airport; now a popular hangout for Heliopolitans and
Nasserites.

The ride in
one direction takes no longer than ten or fifteen minutes. The 60km speed limit
is often ignored, but it shouldn’t be; driving on this road is a pleasure – the
wide road, the gradients, twists, turns and cruising traffic are all to be savoured,
not rushed. On a Friday morning, going in one direction is never enough; so the
driver turns around, and heads back to Nasr City.

Immediately on the right is a modern-looking Youth Centre, an uphill gradient
and a right turn follow. It’s straight sailing underneath the bridge flyover,
until another right turn. As you come up to this second right turn, you will
see what we fear most; the tumour threatening to kill this automotive lifeline–
Sun City Mall. It’s built in an excavation seven- floors-deep; so only the roof
is visible once you take the turn.

Cruising
past, there is a different gas station, this time a large Mobil station. On
most nights, you can see scores of cars parked in front of the gas stations’
FBI Juice Bar, with doors open and music blaring in what looks like a scene
adapted from American Graffiti. A
right turn and a downward slope eases the car into the next straightaway, then
into the final gentle left turn before arriving where it all started, at the ‘4.5
km’ bridge.

Sadly, our unborn
children will not know this specific pleasure. Perhaps they will have their own
favourite driving road – that’s if we’re not all in hovercrafts or a perpetual
traffic jam by then. What we lament is not just the loss of a great driving
road, but also the end of an era. Time was when this road was an unlit death trap,
and then it was given life and safety with thousands of trees and streetlights.
And it stayed that way for a very long time. It feels like that time is coming
to an end. The road is a landmark of many of our own youths, and to see it go makes
the passing of time in the city of Cairo
seem all the more real.

As for our kids,
we can only ask them to suspend their scepticism while we relate stories of
drag races, spilt juice and golden afternoon cruises listening to Def Leppard
or Kyte. We hope they’ll understand.